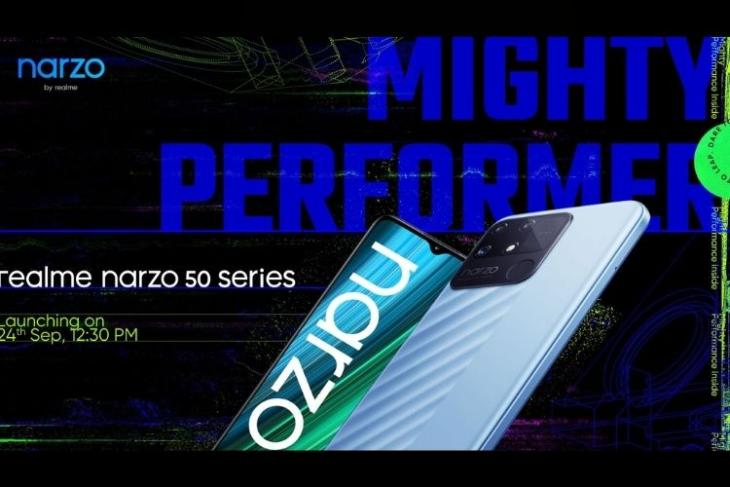 Realme has been releasing a slew of products, including new mid-range smartphones, budget-focused C-series phones, and various other accessories in India lately. Now, after launching the Narzo 30 series in India earlier this year, the Chinese giant has confirmed to launch the Narzo 50 series, the Realme Band 2 fitness wearable, and a new smart TV lineup in India on September 24.

So, let’s take a look at the expected specs and features of the Narzo 50 series and the other products that the company will launch next week.

Realme announced the virtual event to unveil the upcoming products in India via an official press release. The company will launch the new Narzo 50 series, Realme Band 2, which it launched in Malaysia recently, and the Realme Smart TV Neo series in India.

Starting with the Realme Narzo 50 series, the company says that the new devices will bring come loaded with features, a powerful gaming-focused processor, a “mega” battery, and AI-enabled cameras.

The company recently shared a tweet to announce the launch of the series in India. Following the initial tweet, the company later shared another tweet to reveal some of the key specs and features of Narzo 50A, which will be one of the devices part of the Narzo 50 series.

According to Realme’s latest tweet (attached below), Narzo 50A will come with the MediaTek Helio G85 processor, a massive 6,000mAh battery, and a 50MP primary camera. Moreover, the company also set up a microsite for the Narzo 50 series on its official website.

As per the microsite, Narzo 50A will feature an edge-to-edge display with a teardrop notch for the selfie snapper. At the back, the device will feature a triple-camera setup, including a 50MP primary sensor, a 2MP macro lens, and a 2MP depth sensor. Furthermore, the device will come with a Super Power Saving Mode that will enable users to run the device for longer periods even with 5% power. The device is shown in a blue colorway with a textured back panel on the website. However, we can presume there will other color options once the device goes official in India.

Other than the Narzo 50 series, Realme will launch its next-gen fitness wearable, the Realme Band 2, in India. The company launched the device in Malaysia recently. Hence, we know all about the key specs and features of the Realme Band 2 ahead of its India launch.

So, the Realme Band 2, unlike the first-gen Realme Band, will feature a bigger 1.4-inch TFT LCD panel, a bigger 204mAh battery, and up to 90 built-in workout modes. It will also be able to track sleep, monitor heart rate and blood oxygen levels, and control various AIoT devices such as smart bulbs and smart plugs.

Realme is also looking to expand its smart TV lineup in India. The Chinese giant has confirmed to launch the 32-inch and 43-inch Realme Smart TV Neo in the country at its upcoming event.

Although not much is known about the specs and features of the upcoming appliance, the Neo smart TV lineup will be the company’s “best entry-level smart TV” in India that will feature “amazing design, high-quality sound”, says Realme. So, the upcoming smart TVs are said to come with a 32-inch bezel-less display and 20W dual stereo speakers for an immersive viewing and sound experience.

These are the products that Realme aims to launch in India next week. The company has confirmed to kick off the launch event at 12:30 PM on September 24. It will be live-streamed on Realme’s official YouTube and Facebook channels.

Realme “Narzo” Teased, Could be the Realme Smartwatch