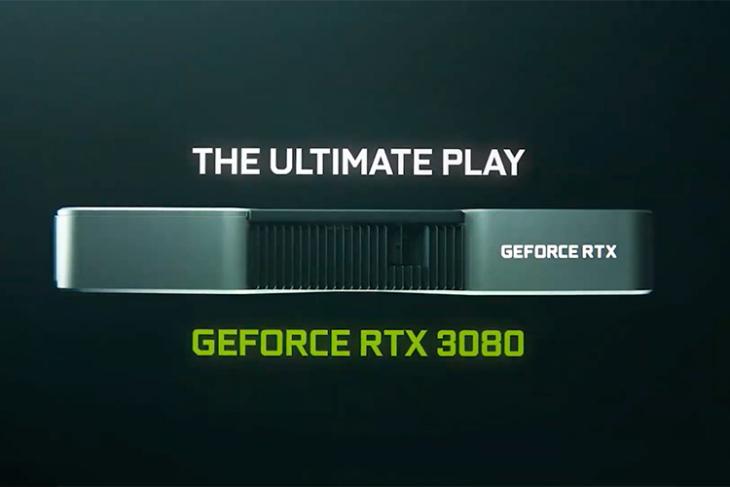 The new RTX 3070, RTX 3080, and RTX 3090 offer up to 2x the performance of the last generation Turing based RTX cards. Moreover, they also offer a 1.9x improvement in power efficiency in comparison to their older brethren.

The new GPUs offer massive improvements across the board. Nvidia claims a 2x FP32 throughput as compared to RTX 20 series GPUs, and 30 Shader-TFLOPS of processing power in the new RTX series of cards. As for ray tracing, the new RT cores offer 2x the throughput of previous generation along with features like concurrent ray tracing, shading and compute, with 58 RT-TFLOPS of processing power.

Nvidia’s RTX 30 series GPUs will also make use of the DLSS technology that last year’s RTX cards used for improved performance in RTX enabled games. However, the RTX 30 series uses third generation Tensor cores, which means they are faster and more efficient for AI powered technologies, including Nvidia DLSS.

The RTX 3070, 3080 and 3090 use the new GDDR6X memory. Developed in partnership with Micron, Nvidia claims that this is the fastest discrete graphics memory in the market with speeds close to 1TB/s for graphics card applications. Basically, you can expect much better game and app performance with the new GPUs.

The RTX 3070 is at the bottom of the stack. Priced at ₹51,000 for the Founders Edition, this GPU offers faster performance than the RTX 2080Ti, and is almost 60% faster than the RTX 2070. The RTX 3070 comes with 8GB of GDDR6 memory. Note that this isn’t the new GDDR6X memory that is present in the other two RTX GPUs announced today.

At the very top is the RTX 3090. Nvidia is calling this the BFGPU (Big Ferocious GPU). It comes with a whopping 24GB GDDR6X memory, is up to 50% faster than even the Titan RTX GPU, and can consistently deliver 60 frames per second for 8K gaming. It has a price to match those insane specs, too, coming in at ₹1,52,000 for the Founders Edition.

For a limited time, customers buying the new RTX 30 series GPUs will get a PC digital download of Watch Dogs: Legion along with a free one year subscription to GeForce Now — Nvidia’s cloud gaming service.

More RTX Enabled Games Are On the Way

Also announced at the event were a bunch of games that will be coming with ray tracing enabled graphics soon. Fortnite is going to add ray tracing to the game, and Call of Duty: Black Ops Cold War will support ray tracing as well. These games will join the likes of Cyberpunk 2077, Dying Light 2, and Watch Dogs: Legion.