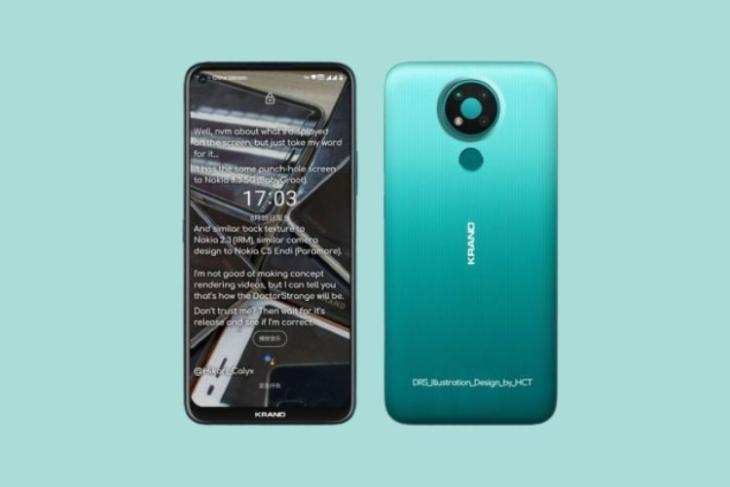 HMD Global, the Finnish giant that now makes Nokia phones, is rumored to unveil a myriad of new smartphones at IFA 2020 next month. While it was earlier expected to debut the entry-level Nokia 2.4, it seems like the Nokia 3.4 will tag along as well. The alleged renders for Nokia 3.4 have made their way online, along with some key specs today.

The render that you see attached above has been created by popular and reliable Nokia tipster Hikari Calyx, who shared the same on his Twitter over the weekend. Nokia 3.4, as per the alleged render, will arrive with a punch-hole LCD display on the front and a circular camera cutout on the rear. The capacitive fingerprint scanner sits under the camera cutout on the rear.

HMD Global experimented with punch-hole cutouts with the Nokia X71 last year and has already debuted the Nokia 8.3 5G with a similar-looking front panel. The circular camera cutout is also becoming synonymous with Nokia phones (a trademark of Moto phones in the past). The triple camera cutout here looks quite like the one aboard the Nokia C5 Endi.

Codenamed Doctor Strange, Nokia 3.4 is expected to be powered by the Snapdragon 460 chipset. It was unveiled alongside the Snapdragon 662 and is rumored to power OnePlus Clover, the company’s upcoming $200 entry-level phone.

Nokia 3.4 will feature a 6.5-inch HD+ display with a 19:9 aspect ratio and 1280 x 720 resolution. The punch-hole at the top left is expected to house a 5MP selfie camera. As for the circular camera setup on the rear, you will find a 13MP primary sensor, a 5MP secondary, and a 2MP tertiary camera.

This smartphone will also come equipped with a 4,000mAh battery with 10W charging support, most likely via a micro-USB port. You will also find a 3.5mm headphone jack onboard. HMD Global will take the wraps off its upcoming phones at IFA 2020, which kicks off 3rd September and will continue until 5th September.