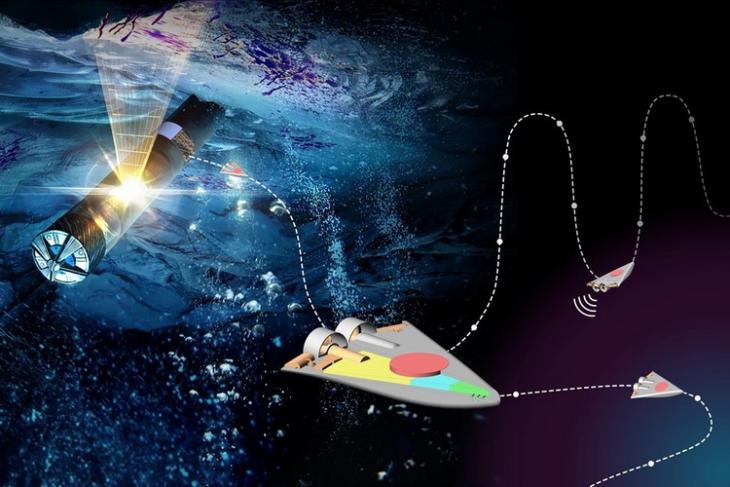 NASA’s scientists and researchers are working to develop new kinds of robots that can search for life forms on other planets in space and the idea of smartphone-sized robots that can swim in icy oceans to find evidence of life forms has been awarded a significant amount as part of NASA’s Innovative Advanced Concepts (NIAC) program. Check out the details right below!

NASA, via a recent official press release, announced that it plans to develop swarms of tiny swimmer robots that will be able to push through frozen crusts of icy oceans and dig deeper to find life forms on distant planets. These robots, dubbed SWIM (Sensing With Independent Micro-Swimmers), will be packed inside a narrow ice-melting probe that will enable them to melt ice crusts in frozen water bodies to go deeper to look for life forms.

Each of these robots would have its own propulsion system, onboard computing system, and ultrasound communications system. There will also be simple sensors for temperature, salinity, acidity, and pressure. Furthermore, it is said to carry relevant chemical sensors to monitor for biomarkers (signs of life) on other planets.

The primary idea of the SWIM robots was developed by NASA’s robotics engineer at its Jet Propulsion Laboratory, Ethan Schaler. The concept was awarded $125,000 funding in 2021 as part of NASA’s Phase I funding under the NIAC program to study the design and feasibility of these robots. Now, it has been awarded $600,000 under NIAC’s Phase II funding, which will allow the team to develop and test 3D prototypes of the SWIM robots over the next two years.

“My idea is, where can we take miniaturized robotics and apply them in interesting new ways for exploring our solar system? With a swarm of small swimming robots, we are able to explore a much larger volume of ocean water and improve our measurements by having multiple robots collecting data in the same area.” Schaler said in a statement.

In the future, NASA plans to deploy these wedge-shaped SWIM robots, which are around 5-inch long and 3-5 cubic inches in volume, on the Europa Clipper mission that is scheduled for 2024. And as the SWIM robots can “flock” together to collect relevant data (an idea inspired by fish or birds), the margin of error would be minimal.

So, what are your thoughts about NASA’s new SWIM robots? Let us know in the comments below, and stay tuned for more such interesting stories.