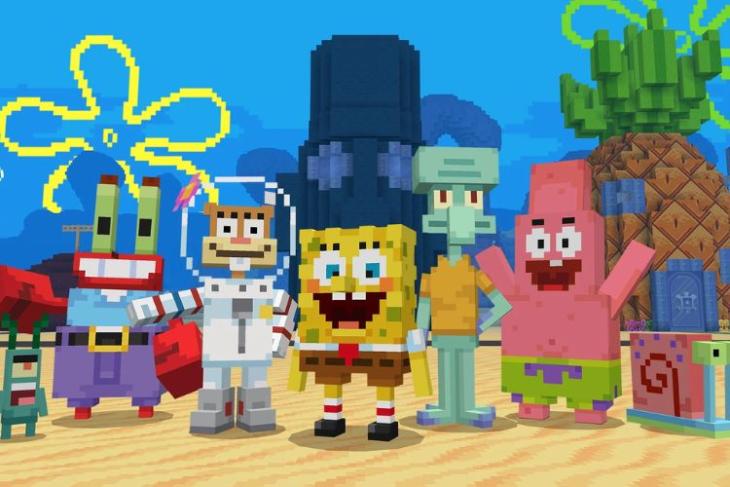 It’s time to hold your breath and dive deep into the oceans. The Minecraft x SpongeBob SquarePants DLC has dropped with exclusive skins, unique missions, and a lot more. After the Minecraft x Ice Age DLC, this is another addition to the game’s series of pop-culture collaborations. Unlike previous add-ons, the Minecraft x SpongeBob DLC is bigger in size and offers mechanics nothing less than those in some of the best Minecraft mods. But will they live up to the expectations? Let’s find out!

Meet Everyone From Bikini Bottom in Minecraft

The iconic Minecraft x SpongeBob DLC recreates the whole town of Bikini Bottom from the SpongeBob Squarepants franchise. With that, you get iconic spots like Krusty Crabs, SpongeBob’s neighborhood, and even spots from limited episodes like jellyfish farms. Most of these locations are purely cosmetic, but you can interact with a few of them. The most noticeable one is Mrs. Puff’s Boating School, which features a driveable boat car.

When it comes to characters, the DLC has all the main characters (Spongebob, Patrick, Squadward, etc.) as well as the less common NPCs and variants of the protagonists. You can spawn all of them with the mob spawn eggs or find them by exploring the city. And while you are exploring, you might also find the missing fireflies of Minecraft that hide in a dark spot of this DLC. Moreover, you can even dress as some of SpongeBob Squarepants characters, thanks to 40 new Minecraft skins that the DLC adds to the game.

In terms of activities, the SpongeBob DLC features interactive buildings, including a launchable rocket, racing games, puzzles, and combat. All of these activities are a part of the six quests that are spread across Bikini Bottom. Other than that, the game allows you to use the space as a custom Minecraft map that you can change and build as per your preferences.

If you a fan of the famous show, you can get the Minecraft x SpongeBob DLC for 1340 Minecoins from Minecraft Marketplace. Like other DLCs, it is also exclusive to the Minecraft Bedrock edition. So, which character are you excited to meet in Minecraft? Do let us know in the comments!