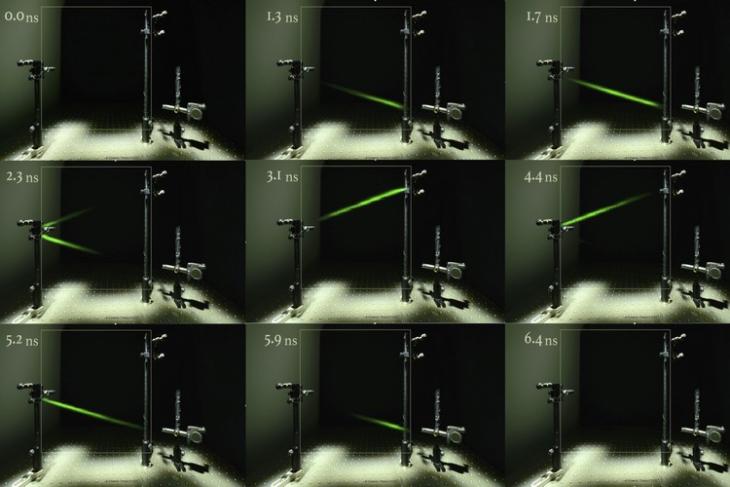 As we all know that light is an element which travels at 29,97,92,458 m/s, which makes it impossible for us to catch a glimpse of it while it is traveling from one point to another. Now, it might seem impossible to capture light when it is traveling. However, a researcher and his team from a Swiss organization recently proved that it really is not.

Edoardo Charbon, a professor of the Swiss Federal Institute of Technology and an expert in the field of ultra-high-speed and 3D optical sensors, recently used an ultra slow-mo camera to record a video of a light trajectory bouncing off of different mirrors.

Now, to capture such a phenomenon, one needs a really advanced camera that can shoot at huge frame rates. So, the professor and his team used the special MegaX camera which is the first camera to capture the smallest particles of light. This camera has a single-photon avalanche diode-based image sensor that can capture a scene at a whopping 24,000 frames per second (FPS).

“The camera operates in gated mode, [meaning] a very fast electronic shutter of 3.8 nanoseconds is used to capture the light as it propagates. Subsequent laser pulses are used, opening the shutter with increasing delay, so as to follow the propagation along its path. Thanks to the large number of pixels and the fast shutter, one can see the light propagation in multiple shots without moving the camera and without superposing the images to images taken with other cameras. Everything is done on MegaX.”, Charbon explained.

The hardware setup to capture the recording was constructed by one of Charbon’s students, Kazuhiro Morimoto with contributions from two other researchers. However, getting a set and a super slow-mo camera was not enough for this experiment.

As light is generally invisible to the human eyes, the team of researchers focussed on the photons from a laser pulse. These pulses from the laser dispersed off various particles in the air. So, by using information about the trajectory of the laser pulse and by calculating the time the laser pulse took to reach the camera sensor, the team was able to frame a 3D light path using machine learning algorithms.

You can check out the team’s published paper on the experiment right here.