It’s not an uncommon occurrence that you are connected to a network by the means of an ethernet cable, and you need to use the internet on other devices as well. Obviously, the first thought would be to somehow create a WiFi hotspot using your PC itself, and share the network with the other devices. However, most (free ones) third party apps that are available for this task are either really bad, or just want to install a ton of bloatware on your computer. So, what do you do? Well, in this article, I’ll walk you through the steps you can take to create a WiFi hotspot on your Windows 10 PC, without using any third party application, whatsoever.

Obviously, you will need a PC that has a WiFi card installed, so you will have to buy a WiFi dongle, if you intend on using this method on a desktop. The method we are using is just one of the many cool things that you can do using the Windows Command Prompt. There are many more cool Command Prompt tricks that you can check out. Well, without any further ado, here are the steps to create a WiFi hotspot on your Windows 10 PC:

Setting Up and Starting the WiFi Hotspot

Replace the “HotspotName” with whatever you want to name your hostpot, and replace “HotspotPassword” with your desired password.

Note: Keep in mind that when you set the password, it will be shown in plain text on the Command Prompt window, so make sure no one else is watching your screen, if you want to secure your network.

2. Once that is done, hit enter, and you will see that the command echoes some lines in the cmd window. This means that the hotspot has been created.

3. You’re not done yet. Before you can access the WiFi hotspot, you will need to start it. So, in the Command Prompt window, type the following command and hit Enter:

Your WiFi network will now be broadcast to all the devices within range, and you can connect to the WiFi network by entering the password you had set up. 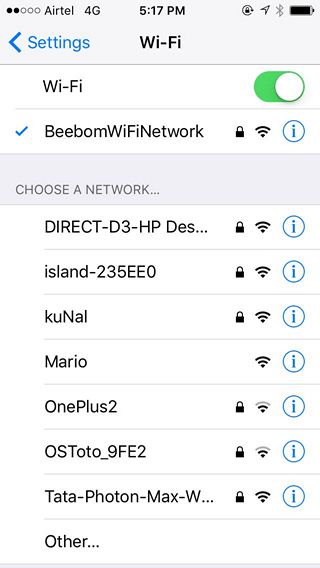 Turning Off the Hotspot

If you later need to turn the hotspot off, you will have to access the Command Prompt again, and use the following command:

This command will turn your WiFi hotspot off, and will effectively stop sharing your Windows 10 PC’s internet connection with other devices.

Share Internet from Your Windows 10 PC to Other Devices Wirelessly

So, the next time you are using a wired connection to your PC, and you want to access internet on other devices, without the hassle of tethering them to your computer using USB cables and whatnot, you can simply use the method we have discussed in this article to create a WiFi hotspot on your Windows PC, and share your internet connection with any device that you want. All that, without the hassle of using a number of different wires for all your different devices, and reverse tethering them. What do you do in situations where you want to share your internet connection with other devices? Do you connect all of them using wires, or do you use a third party app for creating a WiFi hotspot on your PC? Let us know in the comments section below.