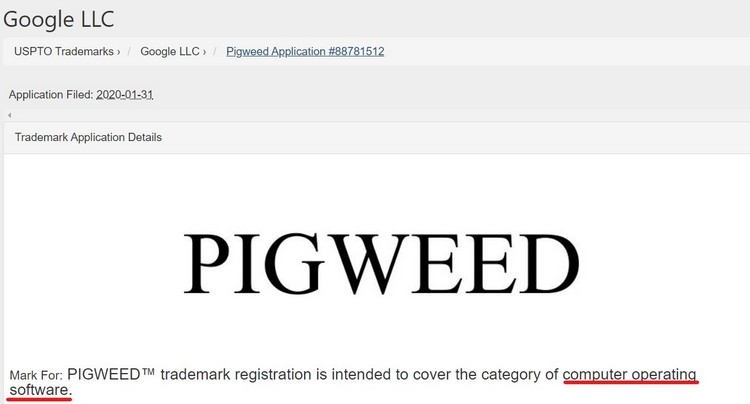 The story of Google developing a new Fuchsia OS took a new turn after Google reportedly filed a new trademark for an operating platform named “Pigweed”.

The name first appeared on the USPTO website. It was discovered by a Reddit user, “lgats“. The description of the trademark says that the name is intended to be used in the category of “computer operating software”.

The name was also spotted in the Chromium code repository and then in a proposed name change in the Fuchsia OS code.

The name change in the code is not quite the solid evidence that “Pigweed” is related to the “Fuchsia OS”. As the above screenshot is observed, you can see someone named Gary Miguel told the developer, “reference to pigweed seems wrong here”, to which he replied, “Done”. Hence, it suggests that the developer responsible for using the name “Pigweed” in the Fuchsia project supposedly made a mistake and then changed it to “Fuchsia” again.

Now in case of the name being spotted in the Chromium code repository, it was found that the name can be located in a code related to “Monorail”, the issue tracker used by Chrome and some other Google projects. While the latter instance suggested that the name has no connection with Fuchsia OS, this case suggests that “Pigweed” has its own separate instances of the Monorail bug tracker and Gerrit code review.

Well, we do not know much about anything till now apart from the above facts and the unusual name of “Pigweed”. Clarifying with the botanists from the Brooklyn Botanical Garden, pigweeds a.k.a amaranths, are edible and nutritious leafy plants. When fully grown, some pigweeds dry out and form tumbleweeds. Then they spread their seeds as they are hurled by the wind.

So is it a completely new computer OS? Or is it actually a new name for the Fuchsia OS? We can just keep guessing until we find hard facts about the plant-based name.

What do you think this name is for? Let us know about your guesses down in the comments.

Xiaomi to Launch the First RedmiBook in India on August 3

How to Change Administrator in Windows 11