Skip to content
Home What is What Is A GaN Charger? (Best GaN Chargers You Can Buy)

Of late, GaN chargers are making quite a noise in the consumer technology space. Manufacturers are slowly releasing charging bricks which are based on the new GaN tech. A lot has already been said and written about GaN chargers — its compact size, faster charging, thermal performance, and much more. However, not many know how GaN tech works and what are the best GaN chargers available in the market right now. So if you are interested, you can go through our in-depth explainer on GaN chargers and the tech behind it. Now without any delay, let’s get straight to the article.

Everything You Need to Know About GaN Chargers

Here, we have explained the GaN tech and how it’s better than Silicon. After that, you can go through the list below and find the best GaN Charger that you can buy right now. You can also click on the link below to move easily between different segments.

What is a GaN Charger?

Before talking about GaN Chargers, let me explain what GaN is in the first place. GaN stands for Gallium Nitride which is a glass-like semiconductor material. Similar to silicon and other semiconductors, Gallium Nitride also conducts electricity, but it does so with far better speed and energy efficiency.

GaN material has been in use since the 1990s but never made it to the mainstream. It’s widely used in lasers, LEDs, and Blu-rays to make disc-reading possible. Now the GaN tech is coming to chargers and the best part is that it’s making our smartphone and laptop charging bricks much smaller in size.

That’s not its only advantage, but it also dissipates less heat leading to better energy efficiency. Simply put, a GaN charger is much smaller in size than traditional chargers and one that is faster and much more energy-efficient than Silicon material.

Why Is Gallium Nitride Superior to Silicon?

Now coming to the technicality as to why Gallium Nitride is superior to Silicon. If you have read a fair bit of Physics, you would know that semiconductors have something called a bandgap. The smaller the bandgap, the better is the flow of electricity from one band to another. For comparison, Silicon has a 1.12 eV bandgap and Gallium Nitride has a 3.4 eV bandgap.

From the figure, it seems that Silicon is a better medium to conduct electricity than GaN. However, the issue here is the loss of energy due to such a small bandgap in Silicon. If the bandgap is too low then photons get too much energy which leads to waste of energy, hence more heat dissipation in silicon-based materials.

Gallium Nitride maintains a healthy bandgap of 3.4eV which ensures more voltage is sustained and the electrons pass through the bands without any loss of energy. It means there is faster processing of charges which leads to better charging speed and efficient flow of energy.

Also, GaN material can survive at higher temperatures much better than Silicon. And due to this less-heat mechanism, GaN chargers don’t require additional components like a heatsink and filter circuit elements which reduce the size of the brick considerably. To sum it up, GaN chargers are better than Silicon ones in terms of footprint, charging speed, and energy efficiency.

Best GaN Chargers You Can Buy in 2020

RAVPower has been making some of the best GaN Chargers for smartphones and laptops. You have three chargers based on GaN tech: 30W, 65W and 90W. You can choose any one of them based on your device power requirement. If you want to charge only your smartphone then the 30W charger would be enough, but if you want to charge both your laptop and smartphone then 65W or 90W charger would be a better pick. 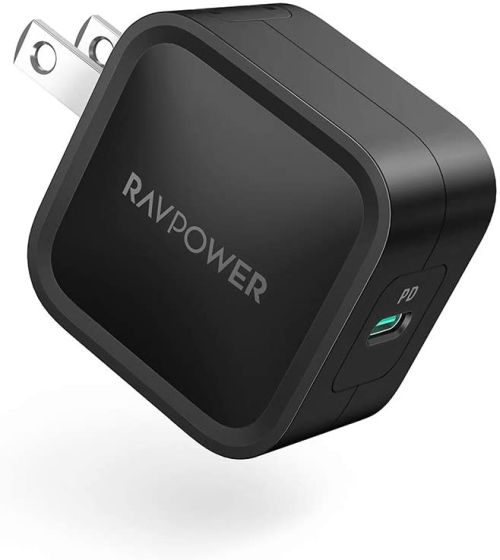 The best part is that it supports USB-PD charging which is found on many both Android and iOS devices. You will even get the fastest charging speed on your new iPhone 12 series device. Keep in mind, GaN charging works better with USB-C standard so make sure you have a USB-C device to take advantage of GaN tech.

Aukey has brought its series of GaN chargers under the Omnia series and in two variants: 65W and 90W. You can charge your MacBook, iPhone, Android device, Nintendo Switch, basically anything you want. And the size of the brick is much smaller than your regular 90W charger which is amazing. 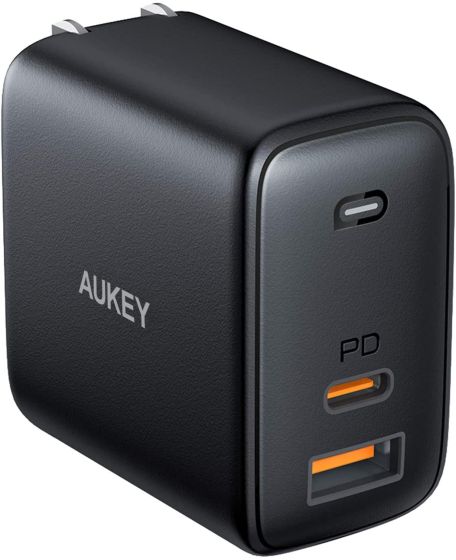 Not to mention, both the chargers come with USB-PD compatibility on the Type-C port and a USB-A port in case you have a USB-A to C cable. Be assured, that you will get the fastest charging speed no matter which device you are charging. So go ahead and buy the Aukey Omnia to experience what GaN charging feels like.

HyperJuice is another company that has done remarkable work in GaN development for charging bricks. It has brought a four-port high speed charging brick that can charge anything at the maximum speed. You have two 100W USB-C ports and two 18W USB-A ports. 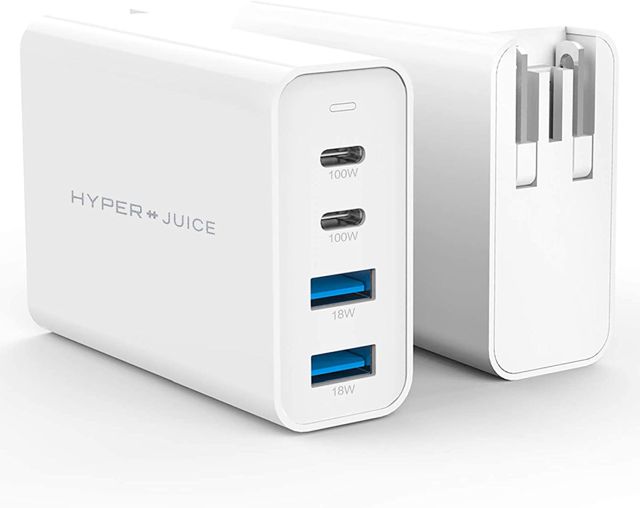 Not to mention, the charger is compatible with Power Delivery protocol so it can charge a huge range of devices including iPhones, Pixels, Galaxy phones, MacBooks, laptops, and more.

As for the GaN chip, it’s using the Industry-leading Navitas GaN Fast NV6117 Power IC. By the way, Navitas is one of the few semiconductor companies which is working on GaN-based chips. So if you want a versatile GaN charger then HyperJuice is the one you should get.

If you are looking for a GaN charger in India then you can take a look at Stuffcool Napoleon. It’s a 65W charger which is based on the GaN tech and offers two ports for fast charging. One is USB-C and another is USB-A port. As for the charge delivery protocols, it supports a host of charging standards. 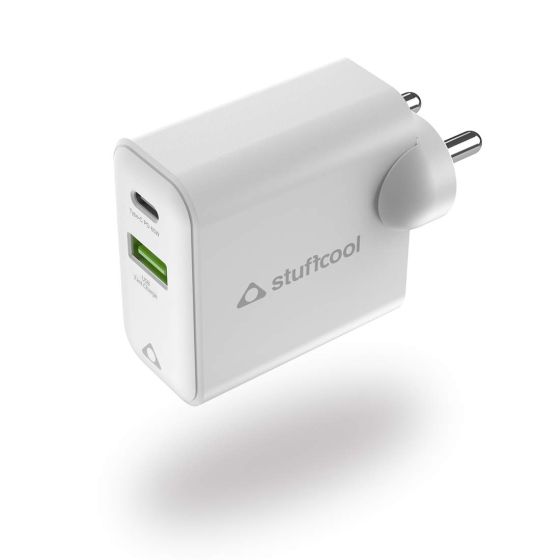 You get Qualcomm Charging 3 support up to 18W, Power Delivery charging up to 18W, 27W fast charging for Samsung smartphones, 45W Power Delivery charging for Dell XPS laptop, and finally 65W PD charger for MacBooks. Basically, you are getting everything in a charging brick that is half the size of traditional laptop chargers. I would say Stuffcool Napoleon is one of the very few GaN chargers in India and you should definitely consider getting it.

Chargeasap is perhaps the most capable GaN charger on this list with output up to 200W. The reason I am putting it at the end is that the Kickstarter campaign is over, but you can get it on Indiegogo by paying a bit higher price. Just like HyperJuice, it offers two USB-C ports and two USB-A ports. The USB-A ports can go up to 18W, but the USB-C ports can easily reach up to 200W. 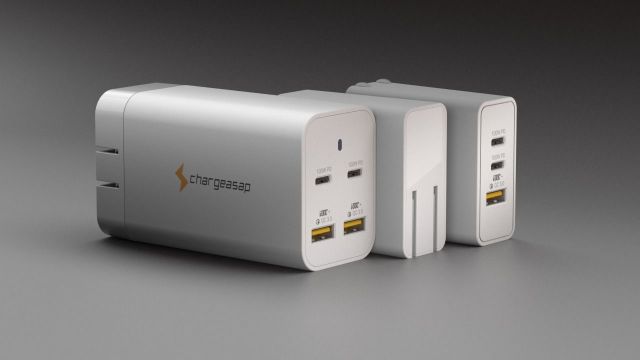 The best part about this charger is that it supports a multitude of charging protocols. From USB-PD 3.0 to Oppo’s VOOC, OnePlus’ Dash Charge, Qualcomm’s QC, and Huawei’s Supercharge, it supports all of them. That is quite a feat, right?

And to bring GaN tech, it is using the latest chip from Navitas: the 6127 IC. To sum it up, if you want the fastest charging brick that is developed on the GaN tech then Chargeasap is the perfect pick for all your devices.

So that is what the new GaN charger is all about. Currently, we can’t say that it’s going to replace Silicon but given the potential it has, surely it seems within the next 5-10 years, things would look much different. It would bring down energy loss between 10% to 25% in consumer technology which is a huge gain. I think, unlike Graphene power banks, GaN tech is here to stay. So what are you waiting for? Go ahead and get the fastest GaN charger for you. In case you have any questions, comment down below and let us know.