There are a ton of good file manager apps available for Android but one app that has remained the popular choice is ES File Explorer. Thanks to its great features and zero price, the app has remained at the top of the hill but as we’ve come to learn, free isn’t always good. Off late, there are have been various reports of ES File Explorer adding spyware to devices, which is not confirmed and ES denies it but it surely makes us skeptic.

Then, there has been a problem of bloatware, with the new “recommended apps and games” section and what with various notifications asking users to download some apps or clean junk files. From what we’ve heard, not all users are facing these barge of notifications, so it might be targeted at a certain geolocation. Another point against ES File Explorer is the fact that the once great app is now a resource hungry & complicated offering. All these points have made us look for an alternative and we are glad that there are a number of capable file manager apps that can fill the shoes of ES Explorer. We are including apps that match ES File Explore’s features and we’ve also made sure to check that these apps aren’t indulging in any spyware or bloatware shoving. So, here it goes:

Solid Explorer is not as popular as ES File Explorer but it certainly is a worthy alternative to it. Coming from ES’s complicated interface, you will love the easy to use and beautiful Material Design UI on Solid. It brings most of ES File Explorer’s important features like cloud support, network sharing, Recycle bin, root explorer, compressed file support etc. It also includes ability to hide or encrypt files & folders and like ES, it includes viewer for most file types. 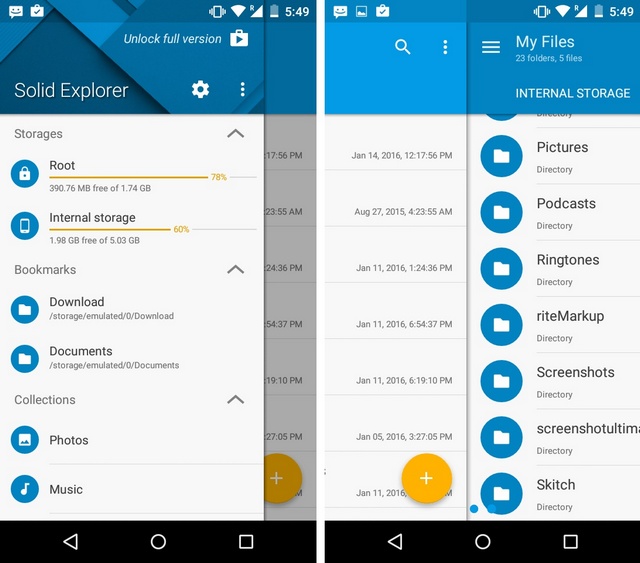 One cool feature is the dual pane multitasking, which splits the screen in landscape mode, so that you can easily drag & drop files between two windows. Solid Explorer also supports plugins for more functionality like casting using Chromecast, USB OTG and unlike ES, you can customize the app’s look as well.

Install: (Free trial with in-app purchase of $0.45 for Premium version)

Another great ES File Explorer alternative is the popular FX File Explorer. The file manager app is very similar to ES, both in terms of looks and features. Firstly, the UI is decent with slight touches of Material Design and one thing we like is the ability to increase/decrease size of folder previews through pinch to zoom. Like ES, FX File Explorer lets you open most file types and supports features like gestures, visual clipboard, app management etc. We like ES File Explorer’s multitasking feature but FX File Explorer takes that implementation and betters it by adding a cool split view interface with drag & drop support. 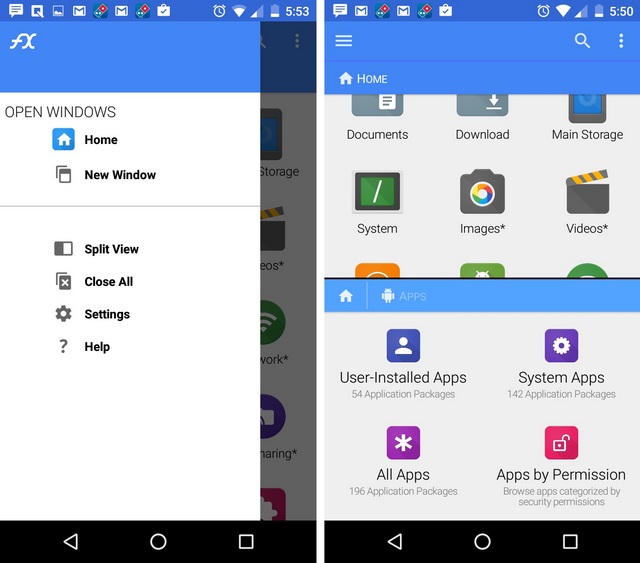 The app also supports various add-ons and while the app is free, it has a paid FX+ add-on, which brings added functionality like cloud sync support, app management, ability to hide or encrypt files etc.

Install: (Free trial with in-app purchase of $2.50 for Plus version) 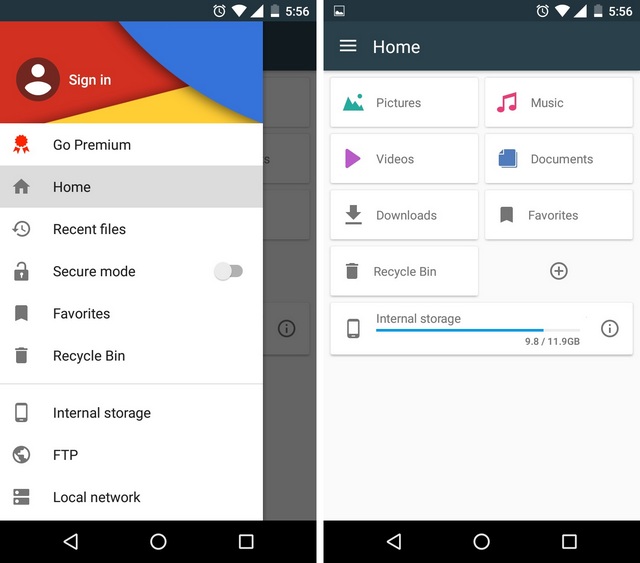 File Commander is a very feature rich file manager app, which makes it a viable ES File Explorer alternative. It brings usual features like file categorization, cloud sync support, network file sharing, USB OTG support, file compression along with some cool advanced features. The app is available in a free version but it’s the Premium version where all the action lies. The Premium version brings advanced features like hide & encryption of files, Recycle bin, Storage analyzer, file bookmarking etc.. While the app does not support multi-window multitasking, it lets you continue copying and moving tasks in the background, which comes handy at times.

Install: (Free with in-app purchase of $3.99 for Premium version) 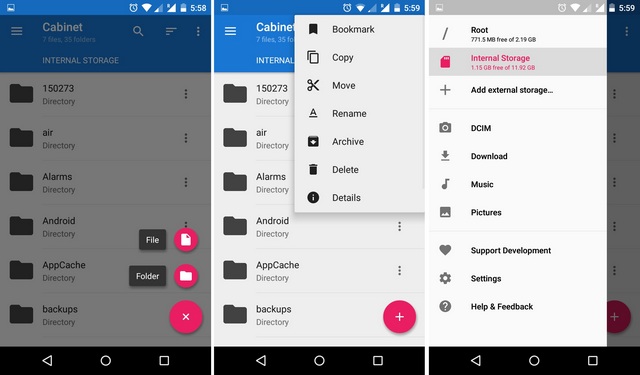 Cabinet Beta feels like fresh air, coming from the fairly overwhelming ES File Explorer. While it does not match ES File Explorer when it comes to the advanced features, the minimalistic UI should work for people who are looking for a simple file manager. Furthermore, the simple UI on Cabinet works better due to its quick access to most used functions and shortcuts. Coming to the features, the app supports the usual file managing capabilities along with features like third party plugins, root explorer, detailed properties and app customization. Overall, Cabinet Beta is a contrast to what ES File Explorer offers and that should please some people. 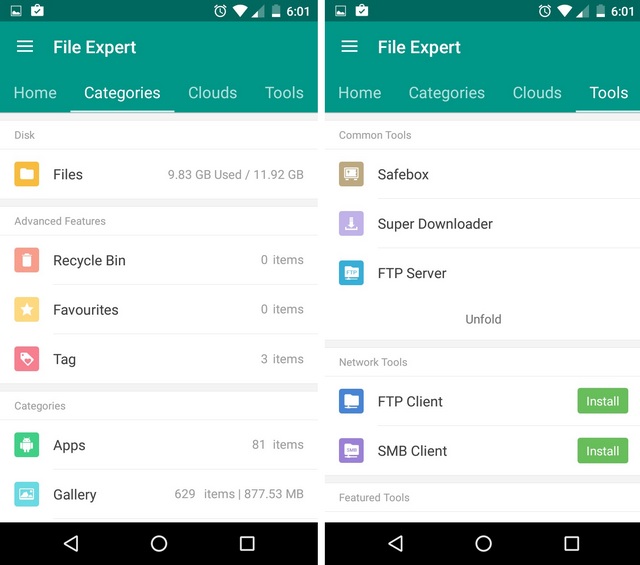 File Expert brings a great mix of usual and advanced features. It includes the usual features like file categorization, cloud sync support (through plugins), compression, Root explorer, customizable homepage, Recycle bin etc. That’s not all though, as the app packs some of its own unique features like Safebox (save private files), Super Downloader, Memory manager and wireless printer support. The app also supports plugins, with which users can go ahead and add functionality. Unlike ES, File Expert features a simple tab layout, which makes locating features and files easy.

Install: (Free with in-app purchases starting at $2.99 for Paid versions)

Replace ES File Explorer on your device with these alternatives

ES File Explorer is a great app and we understand that the developers had to take some measures to support itself but they could have used a different way. Well, we hope they make things right but until then, you must give these alternatives a try because they are worth it. So, what do you think? Which file manager app will replace ES File Explorer on your device? Sound off in the comments section below. 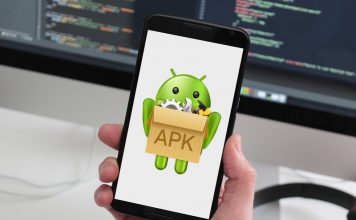 How to Extract APK File of Android App Without Root

An APK file is the final product that is produced after developing an Android app. It goes with the .apk extension and is also known...
Abhishek Macwan - Mar 5, 2017 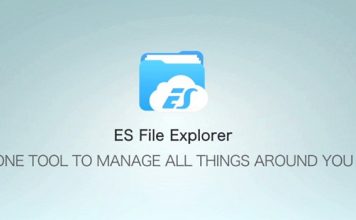 Stock Android has always lacked a built-in file manager app and while that changed with Android 6.0 Marshmallow, it's still not the full featured solution...
Rupesh Sinha - Nov 12, 2016

If you are using stock Android on a Nexus or Motorola smartphone, you would know that a File Manager app is missing from the...
Rupesh Sinha - Jan 13, 2016