It’s not that usual when Apple Inc comes with an enlarged version of its Smartphone! It is the same unusualness that journalists did face when Apple announced iPhone 6 Plus — a bigger version of iPhone 6, for those who wanted a big screen and more capabilities. It was a kind of same surprise that tech journalists faced on September 9th 2015, when there was the launch of Apple iPhone 6s and Apple iPhone 6s Plus, the enhanced versions of the previous devices. Among these, iPhone 6s Plus is the bigger one, with 5.5-inched screen and Retina HD Display. Though both iPhone 6 Plus and iPhone 6s Plus may seem to be utterly similar to you, there are lots of stuff that has changed.

For instance, there is 3D Touch, which adds an extra dimension to your touchf, by analyzing pressure you apply. And, iPhone 6s Plus makes use of Apple A9 Chipset that gives 70% of performance boost. On top of all these, what makes iPhone 6s Plus different from its predecessor is the use of 7000 Series aluminum, which offers the sturdiness of material that is in use by aerospace industry. Also, you’d love to have the extra powerful iPhone glass and a gold finish that is beautiful as well, in many perspectives. And, when we count its 1920*1080 full HD display into the account, iPhone 6s Plus literally brings Christmas — and, there’s iOS 9 as well.

Despite the sturdier build, however, there are instances when you think you should have an extra protection for your iPhone 6s Plus. The phone yet to reach stores, you can make sure that you have got the best protective case for your 6s Plus. In this post, we have a list of top 15 iPhone 6s Plus Cases. 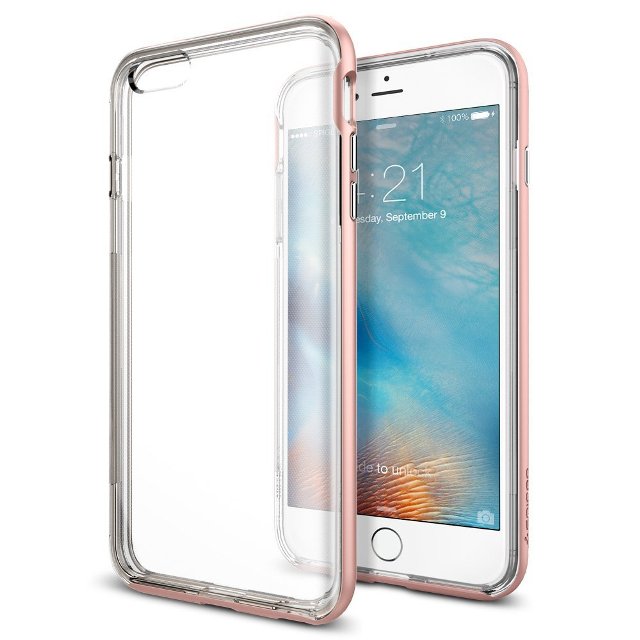 For those who are interested in giving your iPhone 6s Plus an extra-level protection without actually interrupting the actual build of device, Spigen Dual Layer iPhone 6s Plus Case is a good choice. As the name says, it’s a dual layer case that is made of hard polycarbonate that is sturdy enough and a Tetra Polyurethane shell that’s flexible enough. So, if the company combines both, you can be sure of the sternness of the protection you’re going to have in the long run. While the tougher outer frame helps the device survive major drops and falls, the inner TPU layer can be as resistant to the shocks and all. Also, Spigen has included raised lip and camera cut-outs. Because of those, you can be just free when you place your iPhone 6s Plus upside down; when you’ve placed it in the natural way, the raised cut-out for its camera makes itself useful. Spigen is way too experienced in the field and you can expect the build quality, we bet.

Although made for the daily user of iPhone 6s Plus, OtterBox Commuter Series iPhone 6s Plus Case makes no kind of compromises when it comes to protection of the device body. As it’s a product that passes quality tests conducted by OtterBox, you can be as confident about ruggedness of the same. While the integrated screen guard solution has an impressive role in keeping the device screen neat, the all-round-protection case would be powerful to rescue your device from drops, dust, scratches and other possible damages. In addition, it seems that OtterBox has tried to keep the thickness as minimum as possible, as OtterBox Commuter Series iPhone 6s Plus Case is a protective case that is meant for day-to-day use and not the adventure one. After all, it’s from OtterBox. 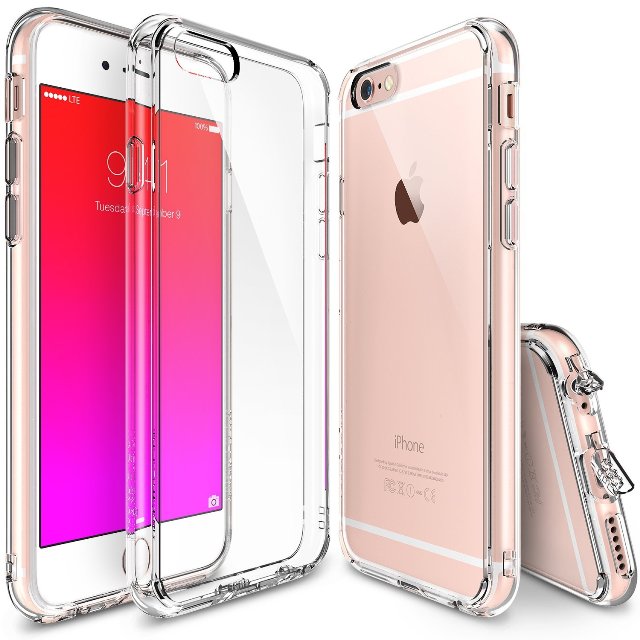 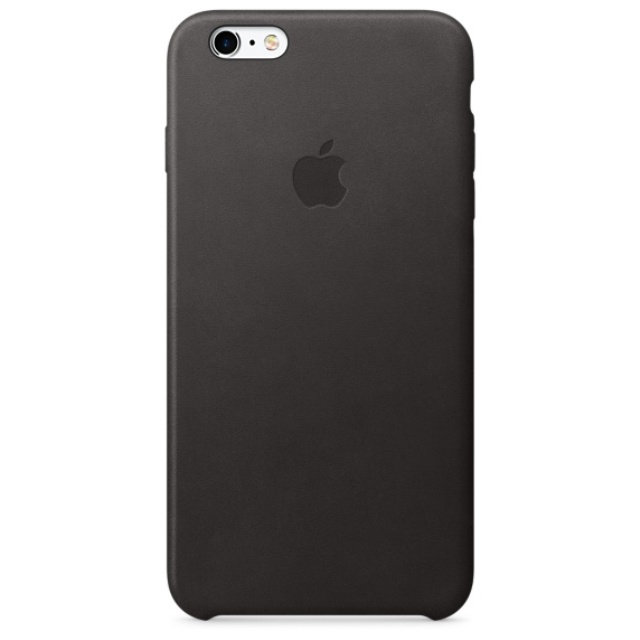 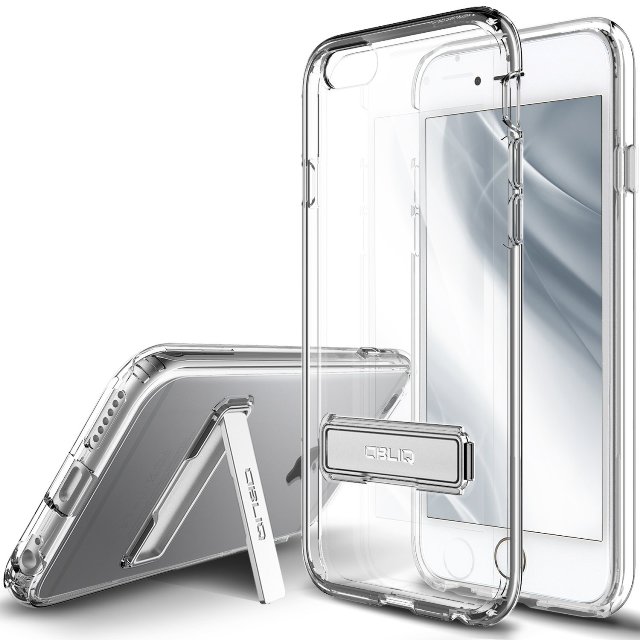 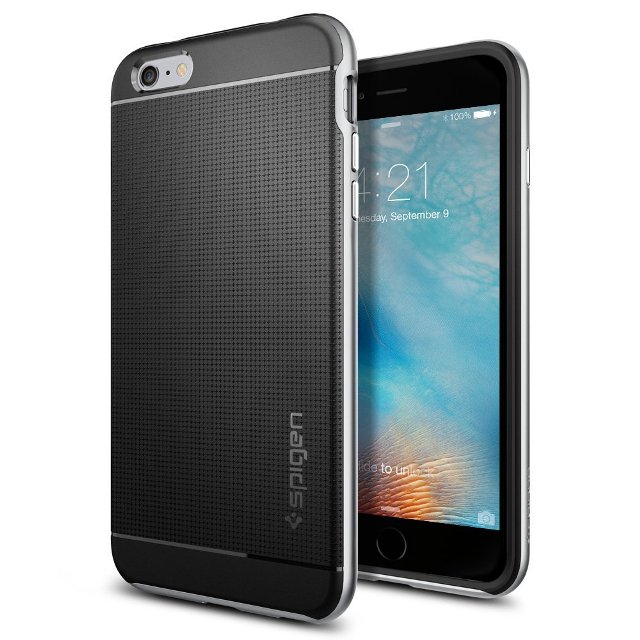 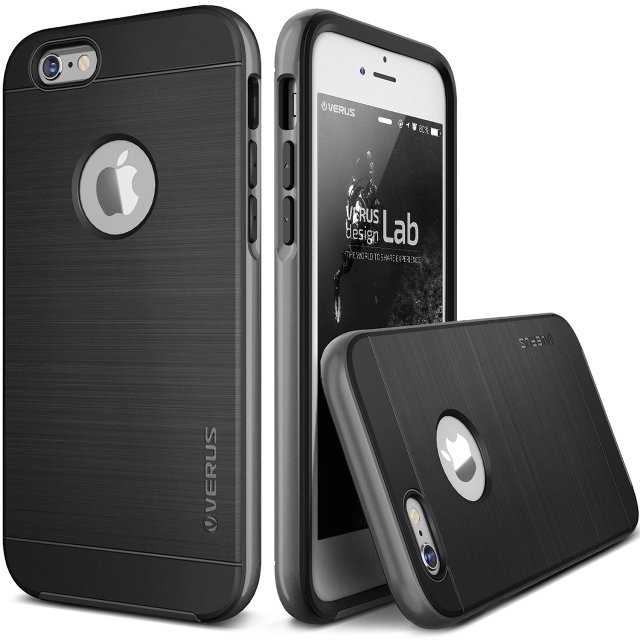 Verus Steel Silver iPhone 6s Plus Case makes more than enough sense when we consider it as a sexy-looking case for your iPhone 6s Plus, despite the fact that the level of protection is impressive. The steel silver design concept of the case is also worth noting, because your iPhone 6s would be apparently revamped after inserting it into Verus Steel Silver iPhone 6s Plus Case. Coming to the protection aspect of this product, the dual layer protection is impressive, it can be said. While the high-grade TPU makes sure that the device is least affected by shocks, the Polycarbonate shell on the outside is resistant to relatively higher damages. Snug-fit design of the protective case is also worth noting, as you have complete access to all the required ports and slots, for that matter. In addition, the brushed-metal look and design of Verus Steel Silver iPhone 6s Plus Case adds style and grip at the same time. After all, you can trust the Air Space Technology from Verus. 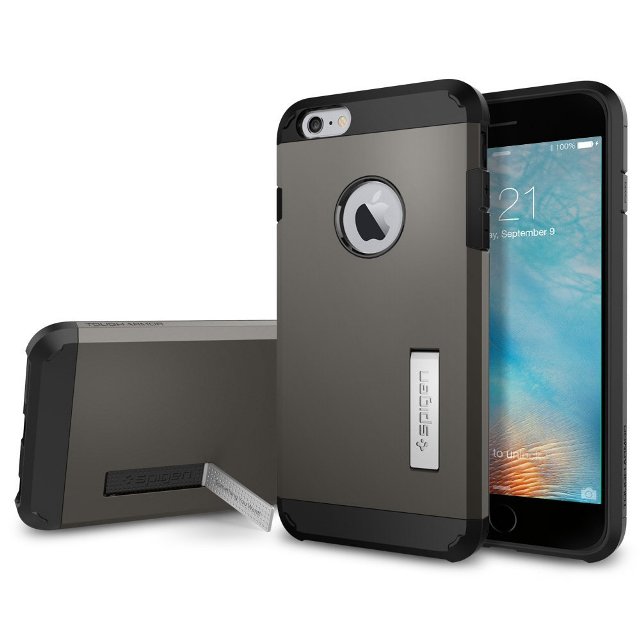 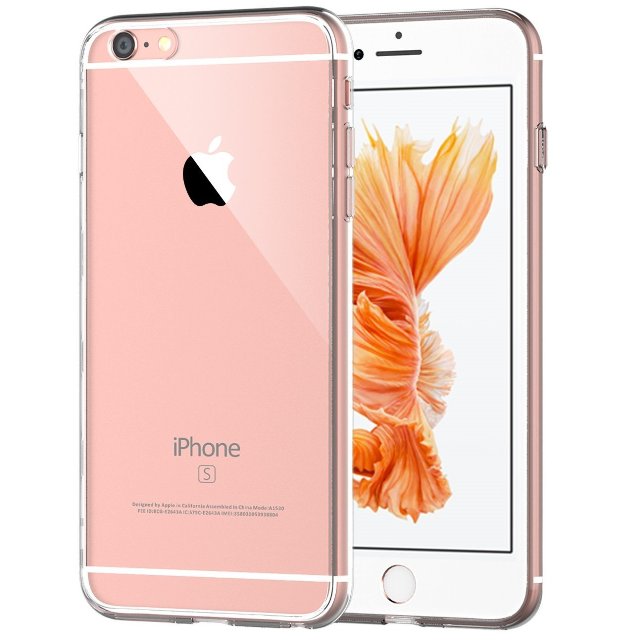 JETech Clear Back iPhone 6s Plus Case is one of the instances when hard Polycarbonate shell and a flexible TPU layer seems to create a made-for-each-other relationship, thus giving you all-the-round protection for your iPhone 6s Plus, from possible issues out there. As you can guess from the name, JETech Clear Back iPhone 6s Plus Case comes with a transparent design and you won’t have to worry about the colour combination and related issues anymore. On the other hand, the protection has never been compromised, but it’s been enhanced several times by adding a core of shock absorption layer in all the four corners so that the device will survive even some bigger crashes. Also, there’s a wide-enough access to all the required ports and sorts, and you won’t have any problems when you want to connect an accessory, be it third party. As per what customers say, people love the dual nature of the protective case, as the case is rubbery on sides and harder when it comes to the back portion — simple as that, nothing compromised. 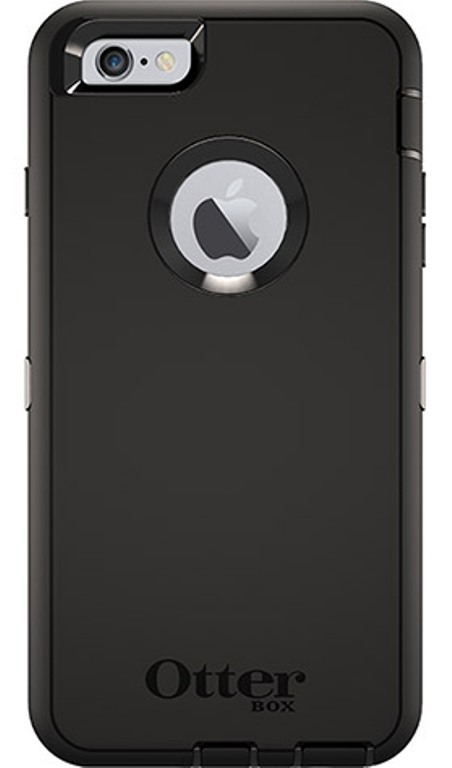 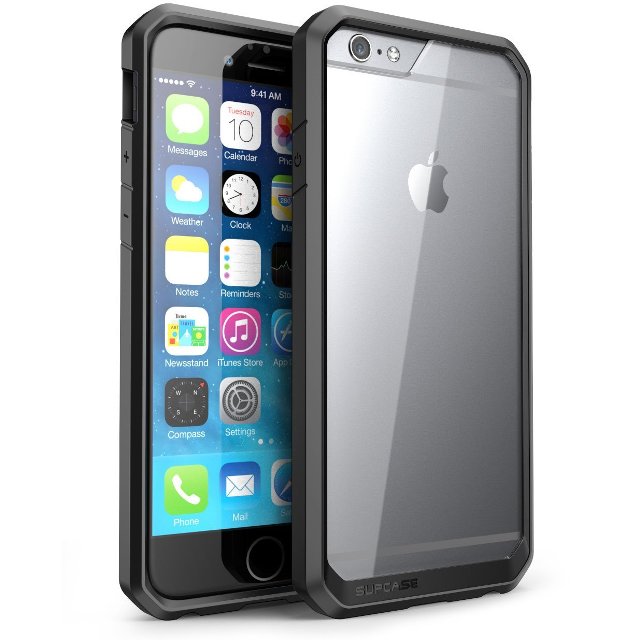 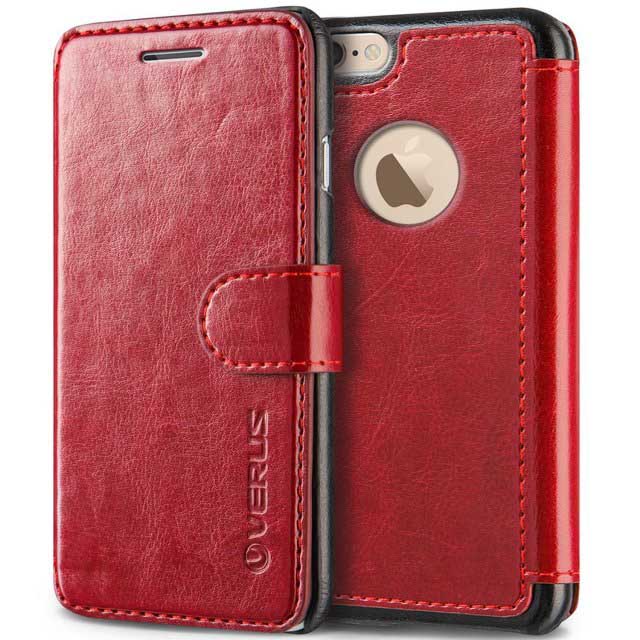 If you don’t find it necessary to carry your wallet always and if you would love to use your phone to store necessary cards and money, Verus Layered Dandy iPhone 6s Plus Wallet Case is a good choice you can make, at least when we consider the convenience of carrying stuff. This snug-fit Smartphone protective case has been manufactured in such a way that your device will be protected from the ever possible aspect; be it corners, edges or the front part. As the case offers all the round protection through the flip-cover design, you don’t have to worry about the screen facing scratches or such issues when you have covered it. And, the wallet-based design is convenient enough to store a few credit/debit cards in your wallet along with some money. On top of all these, there is a magnetic clip that helps you to keep the phone more secure, by adding an extra lock there. After all, you should consider the professional kind of design concept Verus has followed throughout the accessory. 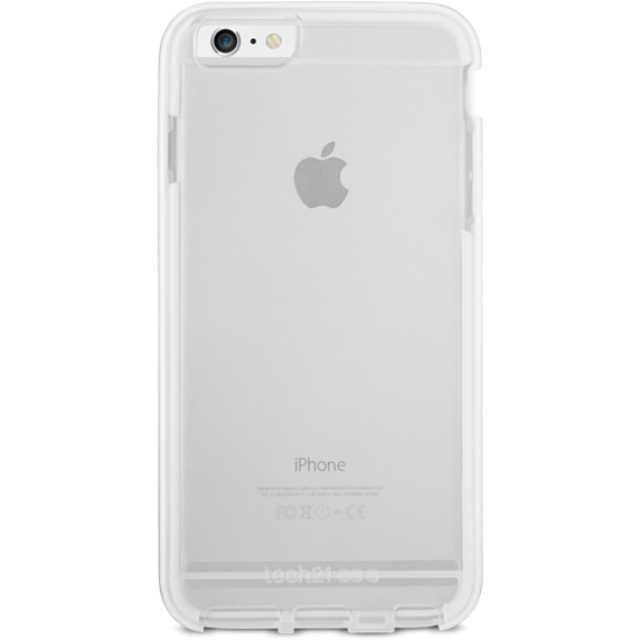 Tech21 Evo Elite iPhone 6s Plus Case is a TPU-made protective case for your iPhone 6s Plus, with a snap-on form factor that is easy enough to be installed in your device. This product comes with a brilliant quality in such a way that it would be able to survive even if you drop it from a 2 meter height. In addition, despite all the protection level that is offered, slimness of the protective case has been kept. When it comes to the construction of the case, the main material in use is FlexShock and this specific element is meant to absorb impact of shocks and other forces your 6s Plus would face in some cases. Tech21 Evo Elite iPhone 6s Plus Case is available from the official accessories store of Apple Inc. We hope you can guess the quality of the product from that statement 😉 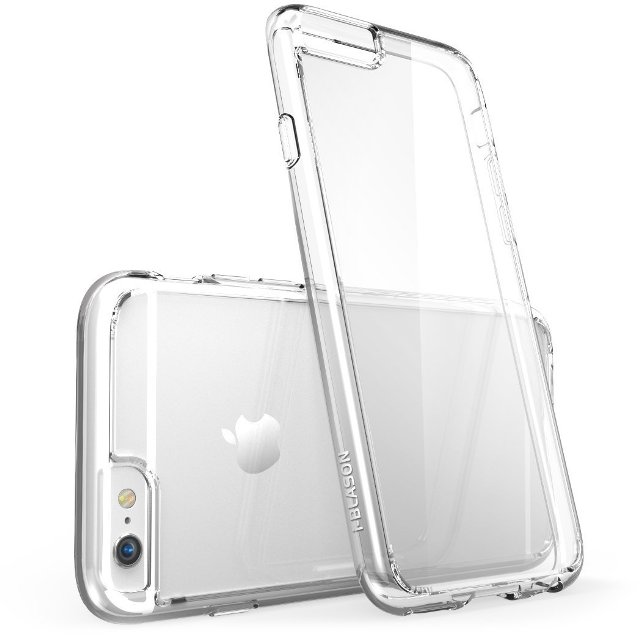 Yet another transparent protective case in our list, i-Blason Clear Halo Series iPhone 6s Plus Case offers rugged-level protection for your iPhone 6s Plus, and you don’t have to miss the silver or gold looks of your 6s Plus, as the case has a transparent protection layer. However, it has to be noted that the material used for production of the case comes with a 3H rating, meaning that it can be way too effective when it comes to protecting the device from scratches and other common issues out there. Nevertheless, it has to be noted that i-Blason Clear Halo Series iPhone 6s Plus Case is offering access to almost every port and button on your Apple iPhone 6s Plus, and the transparent design can give you a clear overview of what is where. On top of all these, it has to be pointed out there i-Blason is a brand that you can trust when you count the ruggedness of protective cases into the account. In addition, i-Blason gives you that freedom to choose the convenient colour from the available list.

Symmetry Series from OtterBox is a particular category of protective cases that focuses on both style and slimness! If you prefer such a duo, you can go for OtterBox Symmetry Series iPhone 6s Plus Case, which is available at expensive rate, to be noted. Talking of the construction of the protective case, there’s synthetic rubber in use and there is core of honeycomb inside the case. Also, when it comes to the case of outer shell, there is hard polycarbonate exterior shell as well. Talking of notable features, we have to mention the raised edge, which help you make sure that display of your iPhone 6s Plus is not affected by your rough usage. After all, OtterBox Symmetry Series iPhone 6s Plus Case is slim enough to fit your pocket well. So, when you’re conscious about comfort of using the case, it’s good to go.

So, what do you think about these protective cases for your iPhone 6s Plus? We are eager to hear from you.