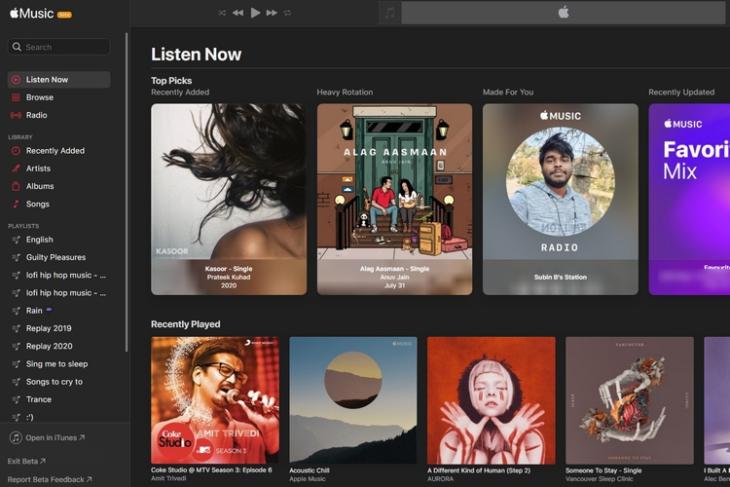 The new beta of Apple Music web comes with a ‘Listen Now’ tab that Apple introduced with iOS 14 and macOS Big Sur. The Listen Now tab replaces the old ‘For You’ tab. It is the default tab that appears when you open Apple Music web.

“Listen Now” on Apple Music offers personalized song recommendations. The page primarily shows the ‘Top Picks’ categorized based on the songs you’ve recently added, the tracks you’ve been listening to on a loop, and more.

The beta version also comes with visual changes in the user interface. The icons in the sidebar are now shown in red color. Apart from that, there are minor improvements in the Made For You category (now inside Listen Now) to bring the design closer to the Apple Music app on macOS.

That said, Apple Music on the web still misses out on the visually pleasing time-synced lyrics available on Apple Music apps across iOS, macOS, and Android. It will be interesting to see if Apple manages to bring lyrics support to Apple Music web.

Unlike most other beta versions of apps and services, Apple Music web’s beta holds true to its name (not in a good way). In my experience, I found the beta version to be buggy and I ran into a lot of error messages.

If you have an active Apple Music subscription, you can see all the changes from Apple Music’s beta website. However, if you prefer the current design, you can continue using it on the stable Apple Music web until Apple eventually brings the beta channel’s UI to the stable version.

What is Apple Lossless Audio and What Devices are Supported?