The man widely credited as being the inventor of the World Wide Web, Sir Tim Berners-Lee, is a worried man these days. It was over twenty-eight years ago that the celebrity computer scientist and Oxford University professor, then working at CERN as an independent contractor, submitted his proposal for what we now know to be the World Wide Web. In various interviews to the media over the past few months, Sir Tim has expressed serious concerns about the concerted efforts by various vested interests in the U.S. and beyond, to dismantle ‘Net Neutrality’.

Also vocal on this issue has been Vint Cerf, known as “one of the fathers of the internet” for being instrumental in the development of the TCP/IP technology. According to him, one of the great benefits of the internet in its current form is that all data has the exact same weight, irrespective of how it’s being transmitted and where it’s being transmitted to. Cerf compares electronic data to “a postcard (that) doesn’t care how it’s being carried”. So with such heavyweights speaking out against proposed regulations to wipe out net neutrality, it isn’t difficult to understand why it’s dominating the news cycles of late. So what is net neutrality after all, and why on earth are people like Vint Cerf and Tim Berners-Lee up publicly expressing concern over FCC’s plans to do away with it? Let’s find out!

What is Net Neutrality?

Net Neutrality is the principle that compels all internet service providers to treat all types of internet traffic as equal without favoring some services or blocking others. So whether you’re streaming Netflix, downloading a torrent, posting a status update on Facebook, hailing an Uber or browsing Wikipedia, your service provider should not be able to either speed up or slow down your connection as long as you stay within your allotted data limit. The principle bars unfair trade practices that could stifle small tech firms and leave ordinary citizens at the mercy of Big Cable. To put it simply, net neutrality is the basis of the free and open Internet that we’ve known for the better part of the past three decades.

Why is Net Neutrality in the News?

Net Neutrality has been a hot-topic issue in the U.S. ever since news emerged late last year about the Trump administration actively considering appointing Ajit Varadaraj Pai as the Chairman of the FCC. The issue has now flared up once again now that the FCC, under Pai, has formally released a draft of its proposed new regulations that proponents of net neutrality say is a massive assault on the very basis of the internet that we use today. The FCC will vote on Pai’s proposal on Dec. 14 and as things stand now, the draft is likely to be passed without any real amendments, paving the way for the repeal of Title II of the Communications Act of 1934, which preserves the internet’s level playing field, allowing people to share and access information of their choosing.

What are the Threats Against Net Neutrality?

Quite simply put, the biggest threat to net neutrality comes from the big cable and phone companies, and their many supporters in the US Congress. As for Pai, he was a controversial choice as an FCC commissioner when he was appointed for a Republican Party position on the agency by President Barack Obama at the behest of the then-Senate Minority leader, Mitch McConnell. That’s because throughout his carrier, first as the Associate General Counsel at Verizon and later, during his tenure at the FCC, he has been a vocal proponent of “light-touch” regulations, which, critics claim, is a fancy way of saying that service providers, content creators and big businesses of all descriptions can get together to decide what we can and cannot access on the world wide web.

He’s also been accused of being way too cozy with big cable and phone companies, who’ve been fighting tooth an nail to abolish Title II ever since it was adopted in 2015. Title II, for the uninitiated, seeks to protect net neutrality by reclassifying broadband providers as common carriers, thereby preventing the likes of Verizon, AT&T and Comcast from blocking, throttling or otherwise interfering with web traffic in any manner. Pai himself voted against the provision back in 2015, claiming that it would undermine investment and innovation.

Unfortunately, though, the reach of the big ISPs goes much deeper than just the FCC Chairperson. Lobbyists for phone and cable companies filed lawsuits the moment the amendment was enacted, trying to return the FCC to a Title I approach that seeks to give control of the internet to the very companies that violated Net Neutrality for years before the FCC adopted Title II.

How Will the Dismantling of Net Neutrality Hurt Internet Users?

According to activists, the FCC’s plan, if successful, will be a big blow for consumers and allow big cable to potentially form a cartelized monopoly, charging websites, blogs and internet services for speedier access to consumers. In fact, this will also empower large internet companies like Google or Facebook to potentially block competing services, thereby reducing choice for regular customers like you or I. When we surf the net, we expect to be in complete control of our internet experience. On the internet we know and love, we expect to be able to connect to whichever website, application or service we choose, whenever we choose, without getting throttled or being told that we can access a particular service or website only if we paid extra to the ISP (the likes of Comcast, Verizon or Charter).

If that were to happen, the internet will become more like the cable TV industry, where you need to pay extra for every ‘premium network’ in your cable package. Instead of being able to access Google, Facebook, YouTube, Amazon, Netflix, the App Store, the Play Store, Snapchat, WhatsApp for a lump sum every month, your internet service provider will suddenly get the all-clear to arbitrarily charge you extra for accessing some or all of these services. Free speech will also suffer, as ISPs could, if they want, prevent dissident voices from speaking freely online. 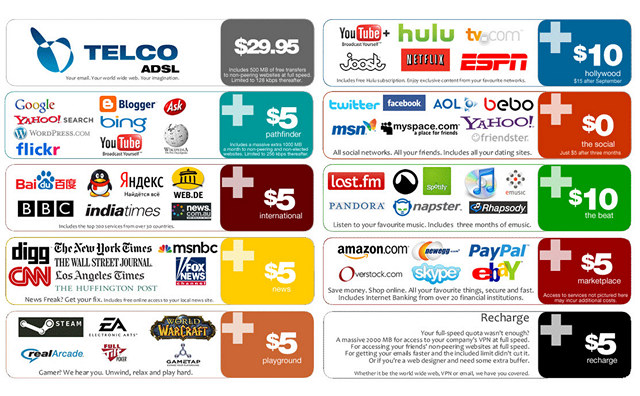 With the ISPs playing gatekeeper, they will also, in theory, be able to ask services like YouTube or Amazon to pay up to be able to connect to users. In case these services choose not to, they may well be taken off your internet list, diluting your internet experience. What’s even more alarming, is that giant corporates like might actually pay off the ISPs to restrict public access to their competitors. So if you prefer Lyft to Uber, tough luck. Because Uber just paid off Verizon and AT&T to restrict their users from accessing the services of its biggest competitor. While it is only an imaginary situation right now, the repeal of Title II might very well be the start of that nightmare scenario.

How Does the Repeal of Net Neutrality in the U.S. Affect Netizens in India?

India has already had its own net neutrality battle a few years ago when Facebook tried to trample over net neutrality by introducing ‘Free Basics’ that would have essentially given users access to Facebook and a few other sites, but not much else. Facebook dangled the ‘free’ carrot in front of the teeming millions eager to experience internet for the first time, but was unable to persuade the public that it was a good idea in the long run. While widespread protests and demonstrations made the government and its agencies wake up from their collective slumber, effectively banning Facebook from going ahead with its dangerous plan, the service, unfortunately, has taken deep roots in many other developing nations, especially in Africa.

Indian ISPs, like Airtel, Reliance Communications and others, also have, from time to time, tried to zero-rate their own services, with ‘Airtel Zero’ being one of the most notorious examples from the past. Thankfully, though, the Telecom Regulatory Authority in India (TRAI) was virtually forced by activists to rule in favor of net neutrality, and under heavy media scanner, ruled against differential data pricing, thereby preserving net neutrality. If the FCC is now successful in its devious plan, the enemies of net neutrality in India (read: Big Telecom) will get a huge incentive to try and make their plans come to fruition, which is something most consumer advocacy groups are extremely worried about; and you should be, too, if you aren’t already.

What Can You Do to Protect Net Neutrality in the U.S.

Chairman Pai unveiled his plan to demolish net neutrality in a closed-door meeting with industry lobbyists earlier this year and followed up on those plans a few weeks later when the FCC voted to move this proposal​ forward. Since then, the agency has received tens of millions of comments from internet users who want to keep the Title II in place. Pai’s FCC, however, is willfully ignoring the huge public outcry, and going ahead with the vote that is expected south the death knell for net neutrality.

The vote is on December 14th, but the day of reckoning is now if you want save net neutrality. You can sign a petition to urge the FCC to ditch this terrible plan, and contact your Congressman and ask them to fight Pai’s diabolical attempts to hand over the guardianship of the open internet to corporates.

Why Net Neutrality Needs to be Protected At Any Cost

The open internet has encouraged innovation and created tens of millions of jobs around the world over the past couple of decades, and is expected to continue doing so for years to come. However, if the FCC is successful in killing off Title II with the blessings of the Trump administration, it is not only likely to eventually raise the cost of internet subscription for average users, it will also stymie innovation and stifle competition to the benefit of established internet giants like Google, Amazon and Facebook, who can afford to pay their way through to every internet subscriber on every ISP. However, it will become a nightmare for startups, who will be at the mercy of big corporates who might just look to kill ’em off if they felt threatened in any way. So if you run a mom-and-pop e-store or a small food blog on some corner of the internet, forget Obamacare, the repeal and replace of Title II could be the ‘most unkindest cut of all’ for you. If you don’t want to be a silent victim of corporate greed, just go over to the two links above and let ’em hear it loud and clear.