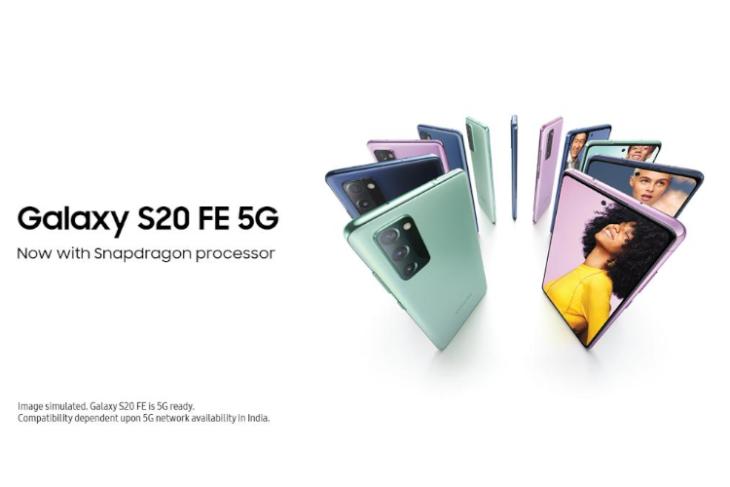 In what could be a major disappointment to Galaxy S20 FE owners in India, Samsung India has announced its plans to launch the Galaxy S20 FE 5G in the country. Yeah, it is not a joke or a rumor. Samsung has officially confirmed the arrival of the Galaxy S20 FE in India. The device will feature the Snapdragon 865  SoC found in the global variant instead of the Exynos 990 chipset.

Samsung India took to Twitter to announce the India launch date for the upcoming Galaxy S20 FE 5G. According to the company, the Galaxy S20 FE 5G will go on sale starting from March 30 in India, meaning Tuesday next week.

All you want, to do all you love. Meet the new #GalaxyS20FE 5G with Snapdragon processor. Sales start March 30, 2021. Register Now: https://t.co/OWyx7p2fPc#MadeForFans #Samsung pic.twitter.com/pkeIkGTKFR

Apart from the chipset upgrade, you could expect the smartphone to pack the same specifications as the S20 FE already available in India. To recall, the device features a 6.5-inch flat Full-HD+ Dynamic AMOLED display with a 120Hz refresh rate, 20:9 aspect ratio, and 2400 x 1080 pixel resolution.

Samsung has used a triple camera setup consisting of a 12MP primary camera, 12MP ultra-wide lens with a 123-degree FOV, and an 8MP telephoto camera with 3x optical zoom and 30x Space Zoom in the Galaxy S20 FE. For selfies, it has a 32MP front camera. The battery is a 4,500mAh unit with support for 25W fast wired charging, 15W wireless charging, and 4.5W reverse wireless charging.

According to a recent IANS report (via ET), the 8GB/128GB variant of the S20 FE will come to India. Moreover, it is said to be priced under Rs. 50,000. When it launches, the 5G-enabled Galaxy S20 FE could be the cheapest Samsung 5G flagship in India. Meanwhile, the 4G variant of Galaxy S20 FE was launched at Rs. 49,999 last year. It is currently selling at just Rs. 36,440 on Amazon India. However, I won’t recommend getting the Exynos variant as it has terrible heating issues.