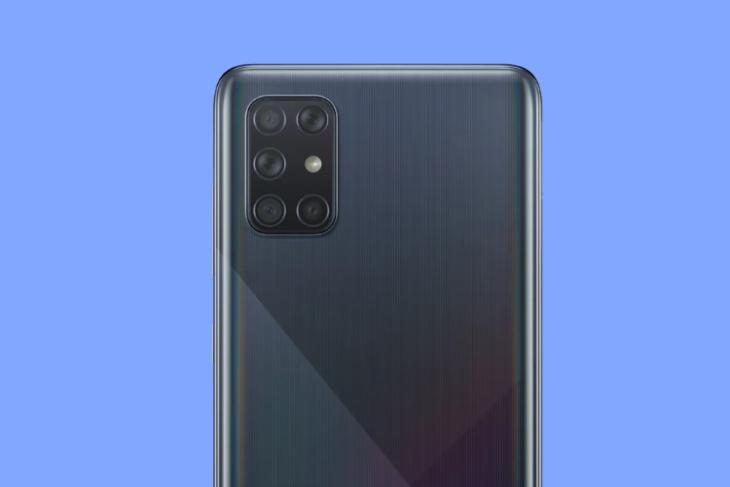 Samsung may have released phones with up to six cameras in total (Galaxy Fold) but the company is now said to be gearing up to launch a smartphone with a penta rear-camera setup. Yeah, five cameras on the rear. It will be Samsung’s first smartphone with five rear cameras and it’s the Galaxy A72 that will be crowned with this title.

As a successor to the Galaxy A71 from earlier this year, Galaxy A72 will be a mid-range offering and is expected to hit the market in the first half of next year, as per a Korean publication report. Samsung could follow the same launch cycle as the Galaxy A71 and debut its successor in late-December or early-January.

The report also shines a light on the specifications of the penta-camera module. It will sport a 64MP primary camera, a 12MP ultra-wide lens, an 8MP telephoto lens with 3x optical zoom, a 5MP macro camera, and a 5MP depth sensor. Previous rumors also suggest that Samsung will bring OIS to the Galaxy A-series with this very smartphone.

The Galaxy A71 already has four of these cameras and Samsung simply needs to lift the 8MP telephoto camera from the recently launched Galaxy S20 FE to meet the rumored specs sheet. The 8MP telephoto camera arrives with OIS support. The report adds that Galaxy A72 will also include a 32MP selfie camera – the same as its predecessor.

Like the Galaxy A9 (2018) was a test-bed for a quad-camera array on the rear, the first in the world, Samsung is again resorting to its mid-range A-series to gauge the demand for a penta-camera setup. Galaxy A72 may be the company’s first penta-camera phone but it will not be the first in the world. Nokia 9 PureView already holds that crown. We have also seen Xiaomi debut its first penta-camera phone, the Mi Note 10, earlier this year.

Samsung Galaxy A52 and Galaxy A72 with 90Hz Display, Snapdragon 720G Launched