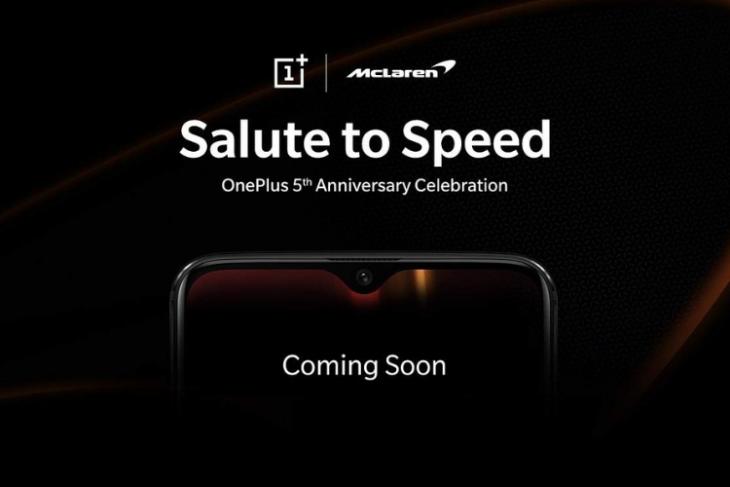 On one hand, OnePlus is making waves by announcing that it will be the first to launch a Snapdragon 855-powered smartphone, on the other, the Chinese giant is building up the anticipation for its OnePlus 6T McLaren Edition launch next week.

OnePlus has yet again partnered with Amazon to exclusively bring “OnePlus 6T McLaren Edition” smartphone to India and the ‘Notify Me‘ landing page for the same has gone live today on the e-commerce platform. This means if you’re looking forward to the new McLaren Edition device, then you can register your interest to learn about the price and availability details via e-mail.

We first learned about the OnePlus-McLaren partnership earlier last week, which is when the company revealed that the two of them are joining forces to “unlock a new long-term technology partnership.” The company is no stranger to brand partnerships but this sure has to be their biggest and most exciting one to date.

While not a whole lot is known about the OnePlus 6T McLaren Edition (if it will be called exactly that) right now, except for the fact that it is expected to come equipped with a whopping 10GB of RAM and 256GB of internal storage.

We also aren’t aware of the new hues of the rear panel but seeing the Thunder Purple color variant and the teasers from OnePlus, it could be a mix of orange and black (or blue).

Sleek on the outside. Powerful on the inside. #SalutetoSpeed @McLarenF1 pic.twitter.com/XtzSjPxM1e

All of the other hardware specifications would possibly remain the same as the regular OnePlus 6T, meaning you will get a 6.41-inch Optic AMOLED display with a waterdrop notch, under-display fingerprint scanner, Snapdragon 845 SoC, dual rear-camera, and superfast charging.