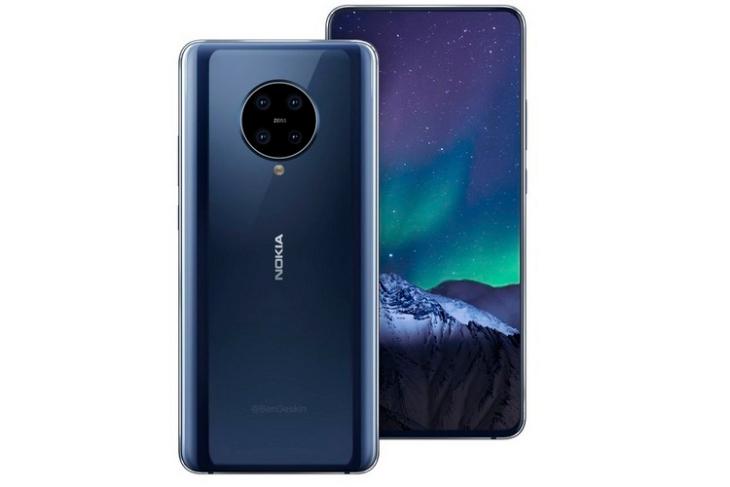 Renowned designer, Ben Geskin, has released a CAD render of the upcoming Nokia 9.2 PureView smartphone, showing a circular camera housing at the back with a quad-cam setup and a notch-less full-screen display upfront. There’s also no physical fingerprint scanner on the back, which suggests the presence of an in-display scanner. Do note that the render is only a concept and not based on any leaks, which means we can’t really tell whether the actual device will look anything like the image below.

The Nokia 9.2 PureView, which was rumored to be unveiled at the MWC 2020 last month before the event had to be cancelled because of the coronavirus outbreak, is now expected to be launched later this year. It will be the first true flagship smartphone from HMD Global since the launch of the original Nokia 9 PureView back in 2018.

Earlier reports had claimed that the company will launch a 9.1 PureView in early 2020 with a so-called ‘Waterfall Display’ and a penta-cam setup like the original Nokia 9 PureView, but those plans were shelved because the company decided to upgrade its specs to incorporate the latest hardware in its next-gen flagship, resulting in the delayed launch.

The Nokia 9.2 PureView is expected to be announced later this year with the Snapdragon 865 instead of the Snapdragon 855 or 855+ that was originally expected to power the device. Unverified rumors also suggest that it will sport a 5.99-inch P-OLED display with a QHD+ pixel resolution, at least 8GB of RAM and 128GB of internal storage. It’s also rumored to ship with a 24MP selfie-camera, a 4,500mAh battery and Android 10 out-of-box.