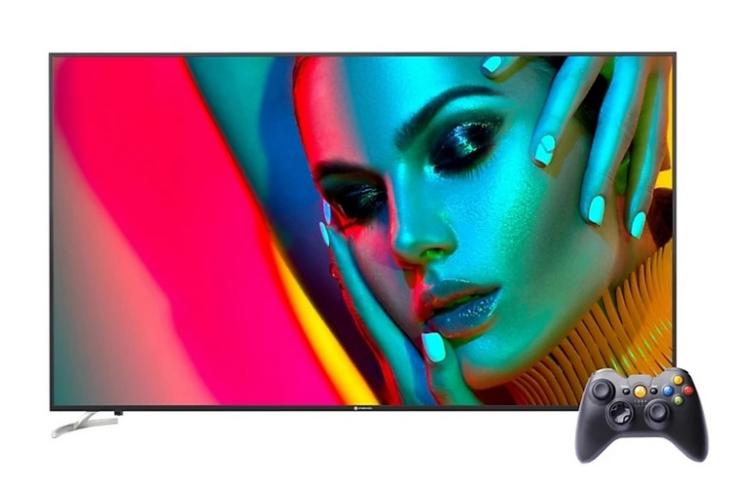 Motorola has expanded its smart TV lineup in India by launching a 75-inch 4K LED television, priced at a hefty Rs. 1.2 lakh. It also comes with a bundled Wireless Android TV Gamepad that incorporates a double joystick and directional keys. According to Motorola, the gamepad will make gaming immersive and engaging, thanks to its ergonomic design and functional layout.

The Motorola Smart TV features a 75-inch 4K (3840 x 2160) IPS LED display with support for Dolby Vision and HDR 10. It also comes with a 178-degree viewing angle, 60Hz refresh rate and 450 nits brightness. It is powered by an unidentified chip that comprises of a 1GHz quad-core Cortex-A53 CPU and a Mali-450 GPU. It also comes with 2.5GB of RAM and 16GB of on-board storage. Audio features include 30W bottom-firing stereo speakers and support for Dolby Audio and DTS Trusurround.

On the software side of things, the TV runs on Android 9 Pie, and offers access to the Google Assistant and the Google Play Store out-of-the-box. It also comes with a number of pre-installed streaming apps, including YouTube, Hotstar, Amazon Prime Videos and Netflix, etc. As for the remote, it not only comes with built-in Chromecast support, but also has dedicated buttons for some of the more popular apps, including Netflix, Google Play, YouTube and Google Assistant.

The Motorola 75-inch 4K Smart Android TV is priced at Rs. 1,19,999 and like all other Motorola smartphones and televisions in the country, will be sold via Flipkart. While the product page on the site is already up and running, the device itself is listed as ‘Coming Soon’, with no word on when it might happen. However, we expect the device to be available for purchase sooner rather than later.