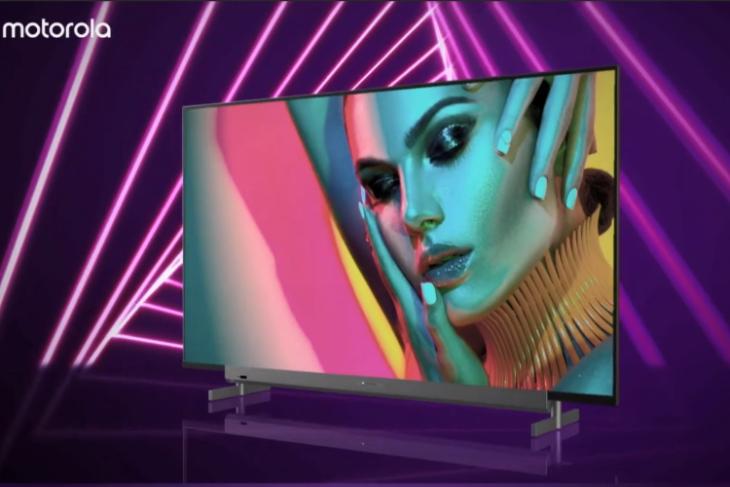 The smartphone market in India is close to reaching its saturation point. With all phone makers flooding each segment with multiple phones, it has become simpler for users to pick a smartphone of their liking. The smart TV market is where the action is right now.

Players like Xiaomi, Vu, iFFalcon and others have shaped the smart TV segment in India, especially the budget market, and it is now rife with opportunity. Motorola is the newest entrant in this fledgling segment and has today unveiled its first-ever smart TV lineup in India.

Motorola has partnered with e-commerce giant Flipkart (who makes its own smart TVs under the MarQ brand name) for the launch of its first-ever lineup of 4K smart TVs. The company’s lineup starts with the 32-inch HD smart TV and goes up to a massive 65-inch 4K TV. It comes with autotuneX display technology, paired with a 178-degree wide-viewing angle, Dolby Vision, HDR 10 support and MEMC (Motion Estimation/Motion Compilation) onboard.

Motorola smart TVs are powered by an octa-core chipset, clocked at 1.1GHz, paired with the Mali 450 GPU, 2.25GB RAM, and 16GB onboard storage. The company has baked its blazex performance tech on board to better the performance. It’s also making it possible for users to connect wireless controllers (where one Bluetooth controller will be bundled with the smart TV) and enjoy Android TV games on its lineup. 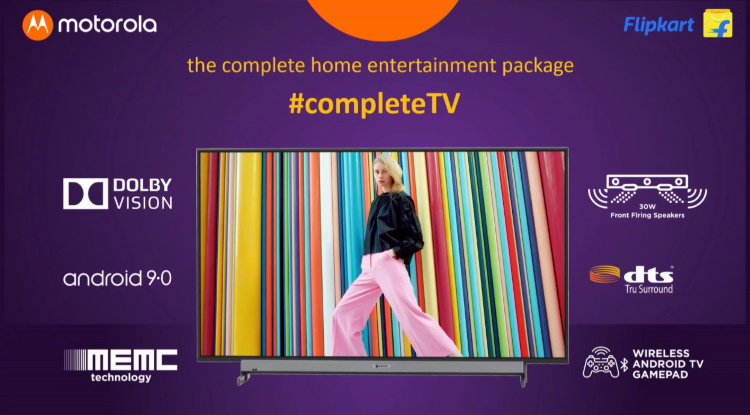 One of the key highlights of the Motorola TV lineup will have to be the 30W integrated soundbar. It sits at the bottom of the smart TVs, with the Motorola logo and integrates pretty well with the whole aesthetic. This is a front-firing speaker unit, with Motorola’s amphisoundX technology, with DTS TruSurround and Dolby Audio support.

Talking about the software, Motorola’s smart TVs run Android 9 Pie out-of-the-box and the company hasn’t toyed much with the experience — unlike Xiaomi or Honor who have heavily skinned the software to offer smart suggestions to users.

Well, Motorola is going all out with its smart TV lineup and kicking off its smart TV lineup with six different models – starting from the 32-inch HDR TV to the 65-inch UHD TV. You can see the pricing details, which is quite aggressive and takes Xiaomi head-on, for each model attached below: 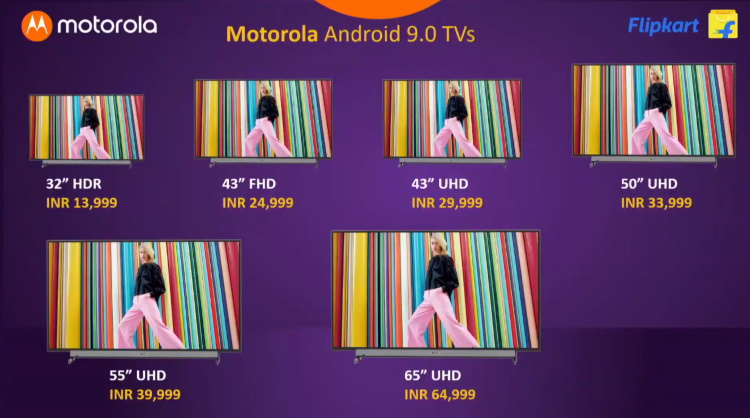 Motorola’s entire new smart TV lineup, which is expansive to begin with, will go on sale starting from 29th September during Flipkart’s Big Billion days sale. Well, we are now waiting for Xiaomi to unveil its new smart TVs in India tomorrow to see how they’re going to compare to Motorola’s offerings. What are your opinions on this smart TV lineup? Let us know in the comments below.