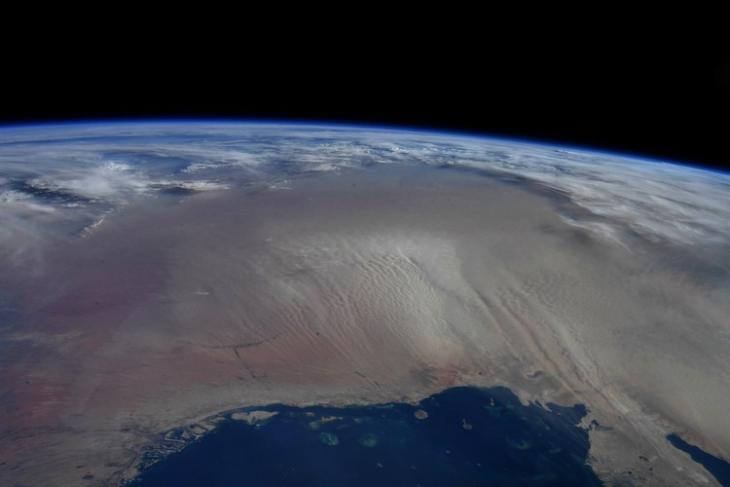 We have witnessed a number of things from space thanks to NASA’s missions and their cameras in space. However, I have always wondered how a natural calamity would look like if one can see them from above at the time of their awakening. Well, that wish of mine has now come true as I saw how a sandstorm looks like when witnessed from way above the sky.

After lots of planning and unexpected delays, on May 30, 2020, Robert Behnken and Douglas Hurley along with “Tremor” sat on SpaceX’s Falcon 9 and flew off to the International Space Station. Since their landing on the space station, Douglas had shared an array of mesmerizing space images on his Twitter handle, @Astro_Doug. Now, one of his recent pictures shows a massive sandstorm happening in the Arabian Desert.

The picture (below) was shared by the astronaut on June 29, 2020, and was taken from the space station when it was passing over countries like Qatar, the UAE, and Saudi Arabia. In the picture, we can see a heavy layer of sand covering a massive area of land.

Hurley shared the image with the caption “Sandstorms in Qatar, United Arab Emirates, and Saudi Arabia” and there is no doubt that it looks beautiful from space.

However, as one of the users commented and I completely agree that the phenomenon looks “stunning” from space but it is “a real pain on the ground“. Another user gave a fine example of it being a “real pain” as she commented that she got caught in one of the storms “just outside Taif in Saudi Arabia” and she “had to hide under a bridge” to be safe.

So, no matter how beautiful it may look, it is still a natural disaster that causes havoc when it awakens. Nonetheless, the fact that we can witness this kind of phenomenon from way above the sky, is pretty insane.