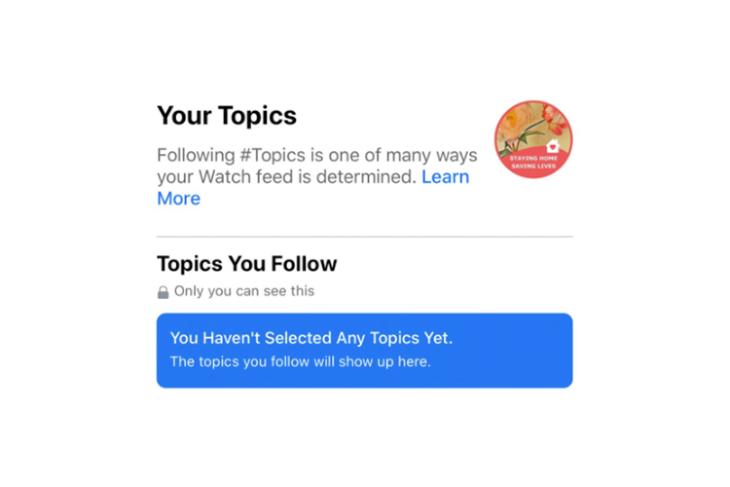 Facebook’s video platform Facebook Watch is rolling out a new feature it calls ‘Your Topics’. While Facebook currently delivers videos on Facebook Watch based on general user interests, the new feature will let users follow niche topics among popular categories.

As spotted by Twitter user whimchic and reported by TechCrunch, Facebook is silently rolling out Topics to users, at least on Facebook’s mobile app. I installed the Facebook app on my Android phone to check this feature, but it doesn’t seem to be present. It is probably rolling out first on iPhones and we could expect a broader rollout soon.

.@Facebook #FacebookWatch follow #Topics. Haven’t noticed this before. Not on ‘Watch’ too often, is this new?? pic.twitter.com/YuG5xcn4I8

Facebook users can access the feature by tapping on the Profile icon in the Facebook Watch tab, followed by choosing ‘Your Topics’. In the ‘Your Topics’ page, you can choose to follow topics that resonate with your interests.

Followed topics show up under “Topics You Follow” in the Your Topics section of Facebook Watch. If a topic no longer interests you, you can unfollow from this section. It is worth noting that only you can see the topics you follow.

Facebook warns users of two possible misbehaviors of Topics. The company acknowledges that the feature may show videos that are not part of the topics you followed. The social media giant also says that users may not see some videos that are related to the followed topics.