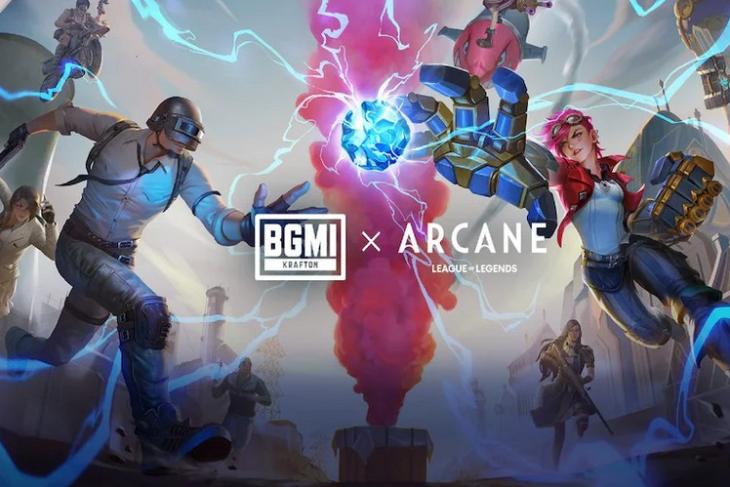 Riot has set a new level for video game-based web series with its latest League of Legends Netflix series Arcane. Citing its popularity in the OTT segment, Krafton is now bringing Arcane-related content to its uber-popular mobile title Battlegrounds Mobile India (BGMI). The company recently announced the 1.7.0 update for BGMI that includes a new Arcane-themed game mode with in-game characters from the Netflix show, and a few gameplay updates. So, let’s take a quick look at the upcoming November update for BGMI.

Krafton shared a tweet, including a well-made trailer for the BGMI x Arcane limited-time game mode. You can check out the tweet attached right below.

Starting with the new game mode dubbed Mirror Island, players will be able to select it from the map selection page. Once the game mode is made available, players will see a new Mirror Island on top of Erangel. They can either jump on the Mirror Island directly from the airship or teleport there via any of the marked locations on the Erangel map after a round begins.

The marked locations will turn into a gateway to the Arcane-themed island and a wind barrier will appear around the locations after the match begins. Players can either teleport to the Piltover or to the Zaun Mirror Island, which are the set pieces of Arcane.

Once in the Mirror Island, players turn into a character from the show Arcane, which includes League of Legends champions like Vi, Jinx, Jayce, Heimerdinger, Caitlyn, and others. Each of these characters will also come with unique in-game weapons and capabilities. However, if you do not like the character you get, you can switch it to another one using a Transformation Device scattered throughout the Mirror Island.

Arcane-themed monsters will also appear on Mirror Island as well as on the Erangel map. You can kill the monsters to gain various items, including the new Hexcrystal that is also an element of the show. You can then tap the new Hexcrystals icon at the right to enter a Dynahex Supply Shop from where you can trade your Hexcrystals for different kinds of loot, including scopes, extended mags, and more. After a certain amount of time, the Mirror Island will close and the players will return to the Erangel map for the remaining battle.

Other than Arcane-related content, Krafton is also making a few subtle gameplay changes to BGMI with the upcoming patch. For starters, players can give fellow knocked-out teammates as well as enemies a piggyback ride to get them to safety. When carrying a knocked-out teammate or enemy, players will not be able to use any weapon or drive a vehicle, and also their movement speed will be reduced.

Furthermore, Krafton is adding some visual changes to the smoke grenades and adding a new location indicator icon for thrown hand grenades. Apart from these, when a player will be near a climbing structure, the jump button will turn to a climb button after the new update.

So, these will be some of the major additions to BGMI with the upcoming November update. You can check out the new patch update video that Krafton recently shared to know more about the features. The update is expected to go live on 19th November for all the BGMI players across India. Which of these new BGMI features are you excited about? Let us know your thoughts in the comments below.