WhatsApp is long-known to be working on a new expiring messages feature, which will enable users to share texts with a timer attached to it. The texts will disappear once the timer has run out. This feature is still under development, but WhatsApp appears to be looking to expand this functionality to media files (images, videos, and GIFs) as well.

First spotted by serial WhatsApp features tracker WABetaInfo, the messaging giant is now working on a new ‘Expiring Media’ feature. The implementation of this feature is said to be a little different from that of the ‘Expiring Messages’ feature. It is similar to what see on Instagram or Snapchat, where the images disappear once viewed.

The media files will not come with a timer and won’t display an expiry message in the chat. Instead, it will completely disappear once the recipient leaves the chat window – either by closing the app or jumping into another conversation. WABetaInfo has also shared images for how this feature will look and work, so let’s take a closer look at the ‘Expiring Media’ feature in WhatsApp.

As seen in the screenshot above, once you have chosen the image, video or GIF file you want to share, you will easily be able to activate ‘media expiry’ by tapping that new timer button on the left. All such media files will be tagged with the timer logo in the chat window, as shown below. This will make it possible for recipients to discern that it’s an expiring media file and they won’t be able to view it repeatedly or save it to their storage. 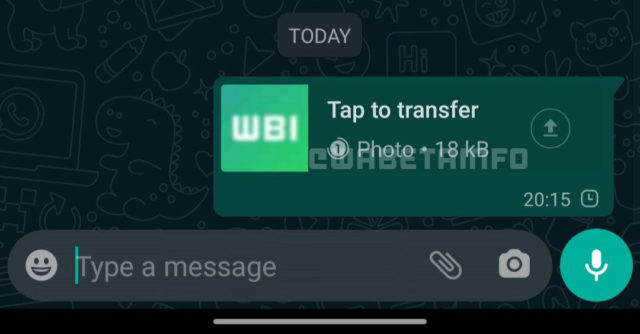 This feature has been spotted in the source code of a recent WhatsApp beta build for Android. It is currently under development, along with the expiring messages and a host of other features. There is no information about its rollout to Android and iOS users just yet.