Skip to content
Home News This Belgian Man Wears a ‘Portable Oasis’ Instead of a Face Mask, Because Why Not? 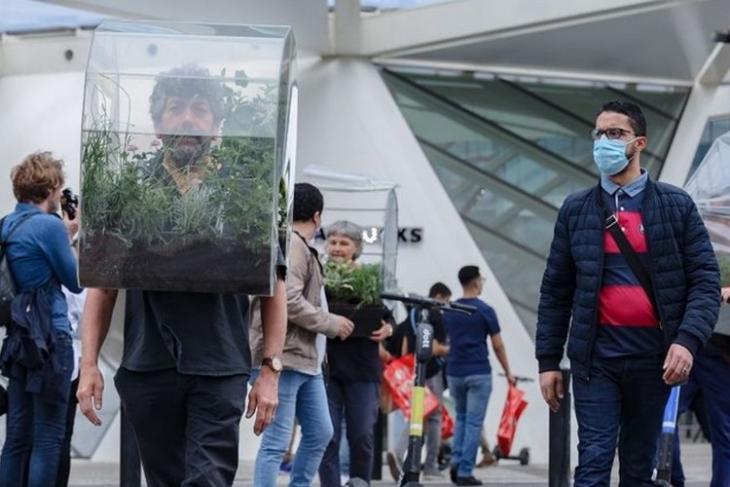 Following the inception of the Coronavirus-led pandemic, we have seen a massive use of face masks in the market as they became a necessity amidst the crisis. As a result, we have seen companies develop unique and unusual facemasks to one-up each other in the market. However, a man in Brussels took the facemask trend to a whole new level as he wears an actual greenhouse on his face to feel calm amidst all the chaos.

A ‘Portable Oasis’ for Your Face

Alain Verschueren, a Belgian artist and social worker, has been strolling through the capital Brussels wearing, what he is calling, a ‘portable oasis’. It is essentially a plexiglass mini-greenhouse surrounding his head filled with aromatic plants inside. It kind of looks like the BioVYZR face shield that we saw in early 2020 but with plants inside.

Verschueren, 61 developed the idea fifteen years ago, inspired by the lush oases in Tunisia where has had previously worked. When Covid 19 hit, he was inspired to revisit the idea.

“An Oasis is a place of calm tranquility cool and well-being in a desert. Here, the fact of having an oasis containing medicinal plants means I am also protecting myself from harm coming from the outside,” Verschueren said.

“It was about creating a bubble in which I could lock myself in, to cut off a world that I find too dull, too noisy, or smelly,” Verschueren said. He also added that he suffers from asthma and with this around his head, he finds it easier to breathe and would choose this over a mask any day.

“As time went by, I noticed that people were coming up to me and talking to me. This isolation became much more a way of connecting,” he further added.

Now, the portable oasis obviously turned heads when Verschueren walked the streets of Brussels. Many were confused to see a man walking with rosemary thyme and lavender plants surrounding his head.

“It is really an alternative to the mask. It’s original. I don’t know what to say. It’s great,” said Ines Houchi, an 18-year-old student from Brussels.

Verschueren said he hoped to motivate people to take better care of our planet, to reduce the need to protect ourselves from air and noise pollution. However, we all know no one’s got the confidence to wear that thing in public except Verschueren, who seems to carry it exceptionally well amidst the Belgians.