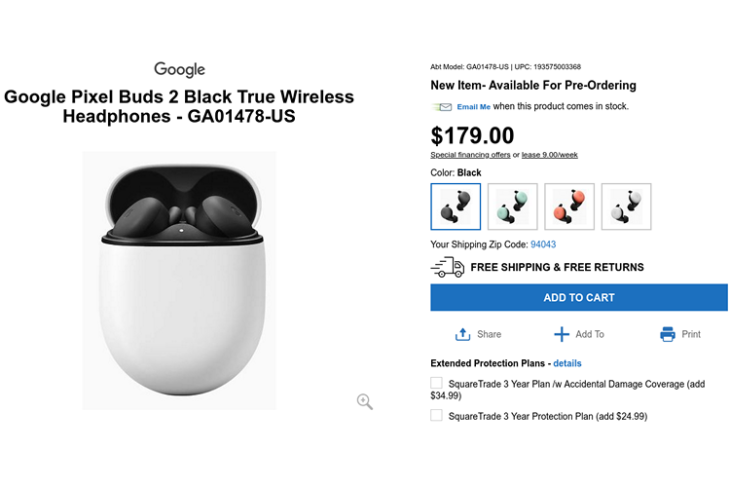 Having originally announced the Pixel Buds 2 alongside the Pixel 4 lineup at its Made by Google 2019 event last October, the search giant is now seemingly ready to launch it sooner rather than later. The device was briefly listed back in February by a third-party online retailer called B&H Photo Video, and now a listing on yet another online retailer, ABT Electronics, has seemingly revealed some of their key tech specs.

According to Android Police, ABT was temporarily taking pre-orders for the Pixel Buds 2 before the product page was removed. The price was listed at $179, which is exactly what Google said it would cost when released in 2020. However, given that the listing was removed without any announcement, it seems like ABT might have jumped the gun in trying to be the first one to take pre-orders for the new device.

In terms of hardware, the Pixel Buds 2 will apparently come with custom-designed 12 mm dynamic speaker drivers for high-quality audio. It will also have built-in sensors to block out ambient noise and focus on the user’s voice for better clarity during voice calls. The earbuds are also said to have an ergonomic design, with the promise of “a customizable, secure fit while the spatial vent keeps you open to the world around you”.

As one would expect, the Pixel Buds 2 are also compatible with Google Assistant, enabling users to play their favorite music, get directions or make voice calls using the ‘Hey Google’ prompt. The device comes with Touch controls, support Bluetooth 4.0 connectivity and is water-resistant. It also comes with wireless charging and requires an Assistant-enabled smartphone running Android 6.0 Marshmallow or above.