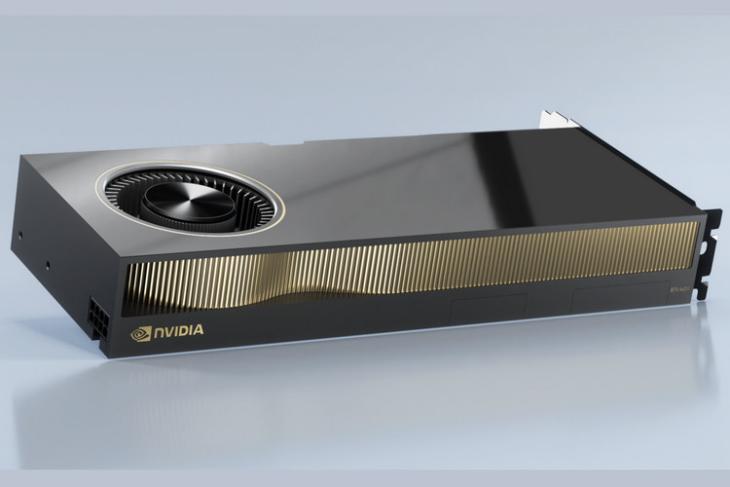 In a move that many believe could be the end of the road for its ‘Quadro‘-branded professional graphics cards, Nvidia on Monday unveiled the RTX A6000 and A40 ‘Ampere’ GPUs for high-end workstations and data-centers without the familiar branding. The move follows the company’s recent decision to replace the Tesla V100 with the Nvidia A100 and possibly discontinue the ‘Titan’ branding for its top-end consumer cards.

Nvidia RTX A6000 and Nvidia A40: Specifications and Features

In terms of hard numbers, both cards come with Nvidia’s Ampere architecture and pack 10,572 CUDA cores alongside 48GB of VRAM. Other specs are relatively similar as well, including 336 tensor cores, 384-bit memory bus width and 300W TDP. However, while the former is meant for standard workstations, the latter is intended for use in commercial data-centers and server farms. Also, while both come with GDDR6 RAM, the A600 is clocked at 16Gbps, while the A40 comes with a memory clock of 14.5Gbps. The cards will only use DisplayPort for video output and will connect to computers through PCIe Gen 4.

Nvidia RTX A6000 and Nvidia A40: Price and Availability

Nvidia is yet to announce either an exact release date or prices for its new GPUs, but says that the RTX A6000 will be available from a number of channel partners, including PNY, Leadtek, Ingram Micro, Ryoyo and on nvidia.com starting mid-December. They will also be available from leading systems manufacturers, like Dell, HP, Lenovo and Boxx, from next year.

As for the A40, it will also be available from OEM workstation and server vendors, including Cisco, Dell, Fujitsu, Hewlett Packard Enterprise and Lenovo, starting early next year.