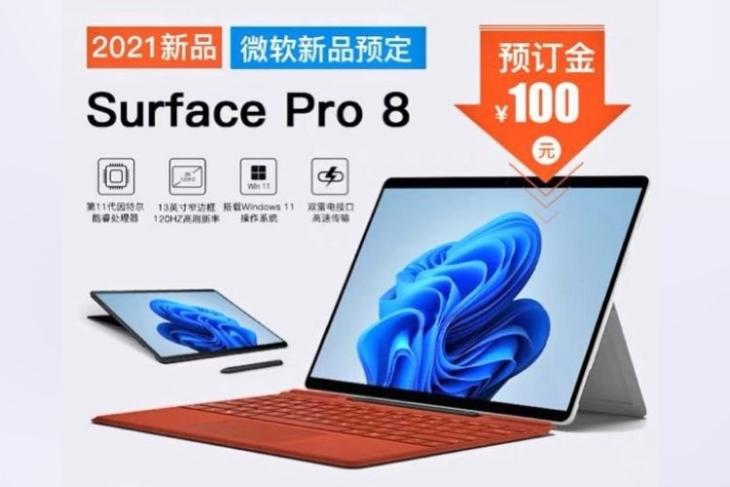 After launching the Surface Pro 7+ in India earlier this year, Microsoft is reportedly aiming to launch the Surface Pro 8 in the global market at its Surface event next week. Now, ahead of the potential launch, a retail banner showcasing the device and some of its key features leaked recently. The Surface Pro 8 will come with a 120Hz display and two Thunderbolt ports, as per the leak.

The leak comes from a tipster on Twitter named Sam (@Shadow_Leak), who recently shared the image of the retail banner. Furthermore, the tipster mentioned some of the key features of the upcoming Microsoft device ahead of its official launch. You can check out the tweet right below.

Now, previous reports showcasing the alleged certification images of the Microsoft Surface Pro 8 suggested that the device could come with a 12.3-inch display. However, as per the recent leak, the Microsoft Surface Pro 8 might feature a bigger 13-inch panel with support for a 120Hz refresh rate. Furthermore, the tipster reports that the upcoming Microsoft device could also feature two Thunderbolt ports, an 11th-gen Intel Core processor, and replaceable SSD drives.

Following the above tweet, the tipster posted another follow-up tweet to share the prices of the base variant of the Microsoft Surface Pro 8 in different regions. So, as per the tweet, the Surface Pro 8 might start from $799 in the US, €680 in the European nations, ¥5169 in China, and Rs. 59,999 in India, at launch.

Microsoft is holding a Surface hardware event on September 22, which is the day after tomorrow, to announce new products. Although the company has not specifically mentioned the Surface Pro 8, we can expect the Redmond giant to announce the device at the event along with the Surface Book 4, Surface Pro X refresh, and Surface Go 3. So stay tuned for more information.