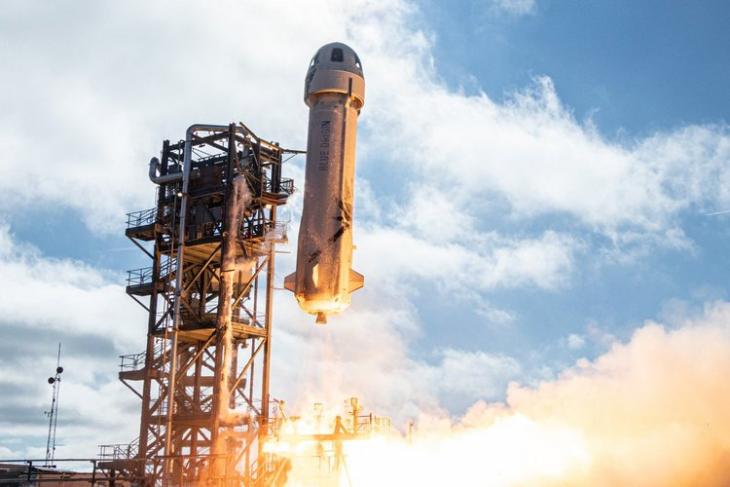 In a step closer to soon take human tourists into space, Jeff Bezos-owned Blue Origin has successfully launched a reusable New Shepard spacecraft on a sub-orbital test flight, a record sixth flight of the re-used booster engine. Aboard the spacecraft that was launched on Wednesday from Blue Origin’s West Texas flight facility after a delay of one day, was a collection of science experiments from NASA, universities, and companies.

This was the sixth flight for the New Shepard vehicle. Blue Origin has so far reused two boosters five times each consecutively, so “today marks a record with this booster completing its 6th flight to space and back,” Blue Origin said in a statement. “This mission was another step towards verifying New Shepard for human spaceflight as we continue to mature the safety and reliability of the vehicle,” said the company.

Today’s #NS12 mission was a complete success. We moved closer towards verifying #NewShepard for human flight. This was the 6th flight for this booster (a record), and the 100th commercial payload customer was on board with thousands of @ClubForFuture postcards #LaunchLandRepeat pic.twitter.com/4Jn8Mn1aue

This particular rocket has been an operational payload vehicle for several flights, meaning there are no more updates to the system. “This was also the 9th commercial payload mission for New Shepard, and we are proud to be have flown our 100th customer on board”, said Blue Origin.

The New Shepard is a reusable vertical takeoff and landing (VToL) space vehicle, consisting of a pressurized capsule atop a booster engine. New Shepard space capsule is designed to fly commercial payloads and up to six passengers on suborbital space flights for science and tourism. The capsule features giant windows to give future passengers a stunning view of their launch into space.