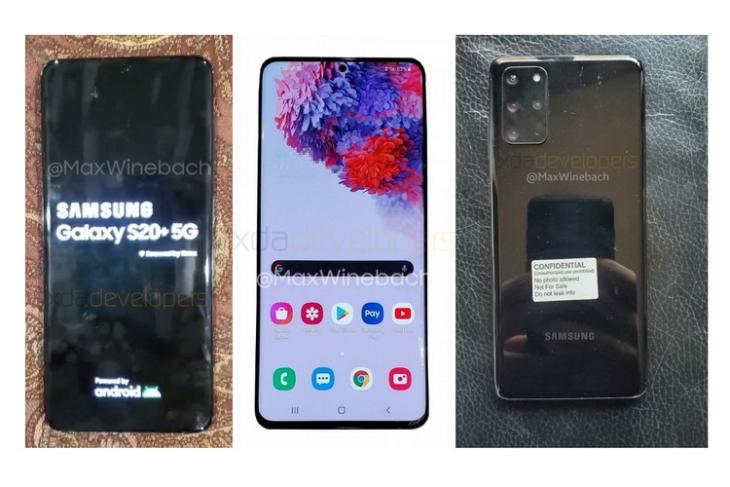 Samsung has already confirmed that its upcoming flagship smartphones will be named the Galaxy S20, S20+ and S20 Ultra, and now, a new hands-on video, supposedly of the S20+, is believed to have revealed not only its design, but some of its key tech specs. The video comes from XDA writer, Max Weinbach, who has been posting details about Samsung’s upcoming flagship smartphones over the past few days, and his latest post now seems to confirm some of the rumored hardware specs of the Galaxy S20+.

First off, screenshots posted by XDA seems to show that the S20+ will, indeed, ship with a 6.7-inch WQHD+ (3200×1440) 120Hz panel, as rumored. Users, however, will apparently have to choose between the high refresh rate and high-resolution, because the report suggests that the high refresh rate can only be enabled when the resolution is reduced to FHD+. Keeping the WQHD+ resolution, meanwhile, will automatically reduce the refresh rate to 60Hz, says Weinbach. There’s apparently no option to enable both simultaneously, possibly, to increase power efficiency.

The leak also shows off the phone’s under-display ultrasonic fingerprint scanner, although, it is not clear if the company is using the new Qualcomm 3D Sonic Max sensor that was unveiled during the Snapdragon Technology Summit in Hawaii last month. Much to the dismay of many users, the video also shows that Samsung is dropping support for the 3.5mm headphone socket in its S-series flagships after doing the same with its Note 10 devices last year. The report also claims that the S20+ will ship with 12GB of LPDDR5 RAM and a 4,500mAh battery with 25W fast-charging.