Skip to content
Home Mobile iPhone How to Clear RAM on iPhone 11, 11 Pro, and 11 Pro Max

Saying iPhone 11 is ahead of the pack when it comes to speed seems quite an understatement. Powered by A13 Bionic chip, Apple’s 2019 iPhones are 20% faster than their predecessors. As for the rivals like Galaxy Note 10 and OnePlus 7T Pro, the new iPhones have left them behind by a significant margin. But that doesn’t mean the iPhone 11 Series devices are not going to slow down in the days to come. And if you are a power user who loves to indulge with hardcore games, set series of Netflix shows for hours of binge-watching or browse the web extensively, chances are pretty high the 4GB RAM will find it extremely tough to cope with that heavy usage. So, you might have to clear RAM on your iPhone 11, 11 Pro, and 11 Pro Max a bit more frequently to get rid of sluggishness.

Even if you are not a power user, your iPhone may feel slow after days of rough and tough usage. And whenever the device seems to run at a snail’s pace, the easiest way to bring back the peak performance is to flush out the RAM so that all the temporary files are wiped out. Talking about the process of resetting memory on iPhone 11 Series devices, you need to first enable AssistiveTouch on your device. After that, you will have to use the virtual Home button to clean up the memory. Here is how it’s done!

Note: As Apple’s modern iPhones don’t feature the Home button, we are forced to use the virtual home button, which exists inside AssistiveTouch, for clearing out RAM. While the bad thing about this trick is that it’s not straightforward, the good thing is that it works on all the iPhones and iPads running the latest iOS versions- even those with the iconic Home button. (If you are running the older versions of iOS, you would find AssistiveTouch option inside: Settings > General > Accessibility.)

2. Now, tap Accessibility and choose Touch located under the PHYSICAL AND MOTOR section on the next screen. 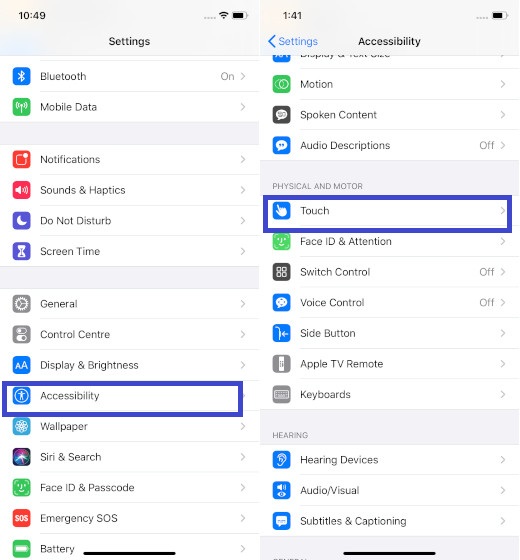 4. Next, tap on the back button at the top left (thrice) to return to the main Settings page. Then, tap General > Scroll down and tap Shut Down. 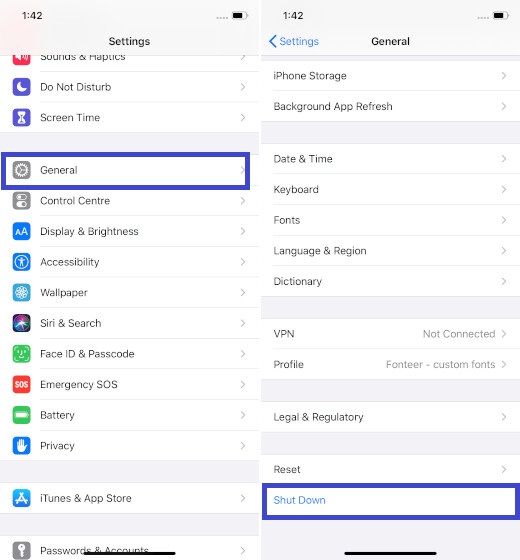 5. On the slide to power off screen, tap the AssistiveTouch button. In the menu, touch and hold the virtual home button until the screen flashes. It hardly takes a few seconds. After the flashing of the screen, you will return to the Home screen of your device. That’s pretty much it!

SEE ALSO: How to Allow Untrusted Shortcuts in Your Library on iOS 13 and iPadOS 13

I can bear with even annoying bugs like “WiFi disconnects when iPhone is locked” to some extent. However, I can’t cope with a sluggish device as it tends to affect the entire spectrum. Luckily, this trick works reliably in resetting RAM and speeding up the iPhone more often than not. What’s your take on this hack and has it worked in speeding up your iOS device? I would like to have your feedback in the comments section.