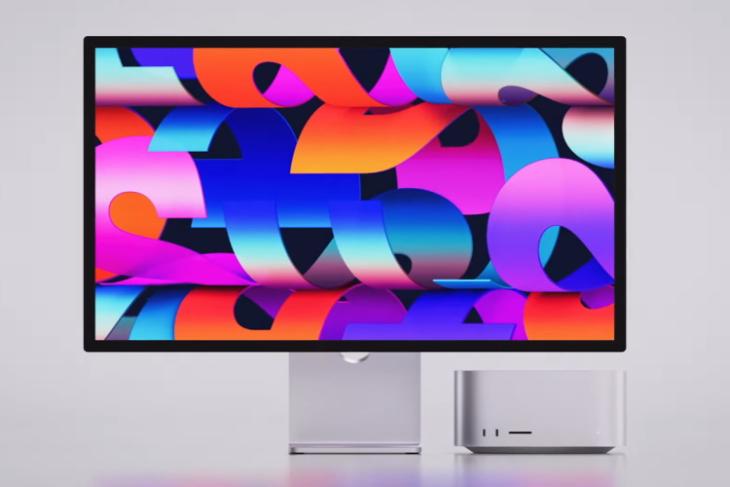 Starting with the Mac Studio, it is an all-in-one system that is designed to cater to creative professionals. It comes in a 7.7 x 7.7 x 3.7-inch all-aluminum chassis with a circular air vent at the bottom to cool down the CPU and GPU during operation.

Now, the Apple Studio Display joins the Pro Display XDR and comes in a smaller form factor. In fact, Apple discontinued its 27-inch iMac after its launch. The latest Apple monitor, with an aluminum and all-screen design, features a 27-inch 5K Retina display with support for True Tone and a peak brightness of 600 nits. There is also a nano-texture glass option for the Studio Display.

Furthermore, the Studio Display has an A13 Bionic chip and features a 12MP ultra-wide front camera with support for Apple’s Center Stage function that automatically widens the field of view when someone gets into the frame. Additionally, it comes with a 6-speaker audio system with support for Spatial Audio, Dolby Atmos, and a three-mic array with studio-quality mics.

Other than these, the Studio Display features three USB-C ports and a Thunderbolt 4 port to connect various accessories or connect the Studio Display with any MacBook or Mac model. Users can also buy the new silver-and-black-colored Magic Keyboard with Touch ID, Magic Trackpad, and Magic Mouse separately.

You can check out the prices of all the Mac Studio configurations on Apple’s official website in India.

You can check out the full prices from over here. Both the Mac Studio and Studio Display are currently available to order on Apple’s website in India and the sale starts on March 18. So, what do you think about the new Apple Mac devices? Let us know in the comments below.