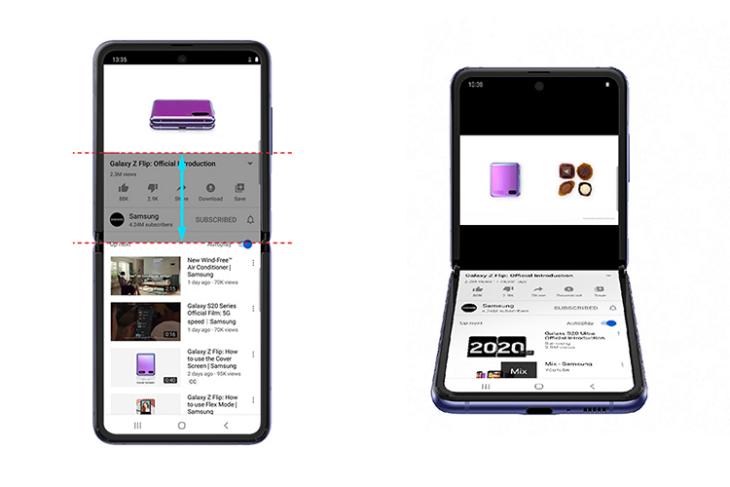 The Galaxy Z Flip folding smartphone now has an ‘optimized’ YouTube app as part of a collaboration between Samsung and Google. The new Flex Mode-optimized app, according to Samsung, brings “a fresh user experience design that fits the innovative form factor of the Galaxy Z Flip”. The partnership, which was originally announced at Galaxy Unpacked 2020 earlier this year, will also bring optimized experiences for other Google apps, including Maps and the Play Store, to Galaxy devices.

According to Samsung, the Galaxy Z Flip already allowed users to set the device on the table and watch their favorite YouTube channel hands-free. However, the optimized version of the app will now enable people to use the bottom half of the display to search for other videos, read descriptions and write comments with no distractions while watching videos on the top half.

“The Flex mode-optimized YouTube app also ensures that no matter what the aspect ratio of the video you are watching, you can view in comfort by adjusting the way the video fits in the top half of the screen. Square and vertical videos will nearly fill the entire space, while 16:9 videos will adjust to the center.”, said Samsung in an official press release.

To optimize the YouTube Android app for the Galaxy Z Flip, Samsung and Google’s engineers redesigned the app from the operating system level. This included integration of the Android Support Library, making it easier to bring support for the so-called Flex Mode to more third-party services. The Flex Mode-optimized YouTube app is available for download from the Google Play Store for all Galaxy Z Flip users.