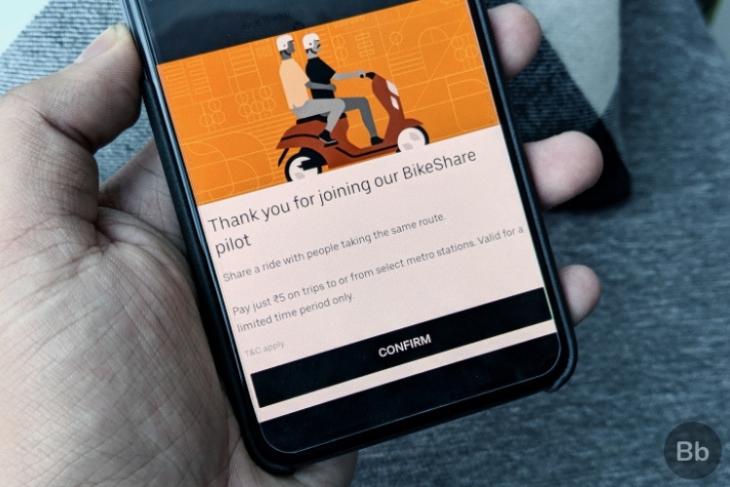 While Uber and Ola have been running bike-hailing services in the NCR region (Gurgaon and Noida) for many years now, the former has now finally started testing this last-mile connectivity option in New Delhi. Dubbed Uber BikeShare, the ride-hailing giant will now Delhiites to share bike rides with fellow Delhiites going in the same direction.

Uber BikeShare is pretty similar to Uber Bike, except for the fact that anyone can offer rides to people while going from Point A to Point B. You will be able to book yourself a BikeShare ride if someone is going in the same direction as your destination point. The company confirmed the pilot on Twitter, introducing riders in New Delhi to their newest mode of travel.

Delhi, your first two-wheeler Uber ride is here. Now you can ride along with a fellow Delhiite going your way, with Uber BikeShare. It just got easier to #LeaveYourCarBehind pic.twitter.com/zHuDQVBXMP

I received the Uber BikeSharing feature last evening and have tried it only once, but it could be the perfect solution for users who travel short distances to-and-fro from work. While the feature is said to match riders going in the same direction, I understand that Uber has also deployed its fleet of Uber Bike drivers (as one was assigned to me) for its ongoing pilot test.

One of the key highlights of this new commute option are the more affordable fares as compared to Ola Bike, Rapido, and others. You can go from Okhla to Malviya Nagar by spending just Rs 35 (lower than Rs 60 I mostly spend on Ola Bike) and from one metro station to another at 5 rupees.

Uber is connecting the metro stations in New Delhi with bike rides, that too at a super affordable price of just Rs 5. 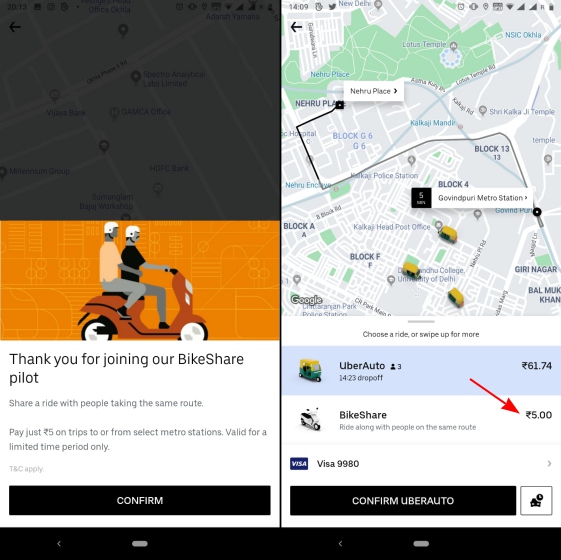 Uber BikeShare is a great initiative from the American ride-hailing company, who’s first reported to have proposed this idea to the Delhi Government last month. The company suggested the use of 5,000 bike-taxis (which are not allowed to operate in Delhi due to regulatory hurdles) to improve the first and last-mile connectivity during the “odd-even scheme,” which is currently in play to help limit pollution on road. It strives to ferry one lakh commuters to and from Metro stations every week.