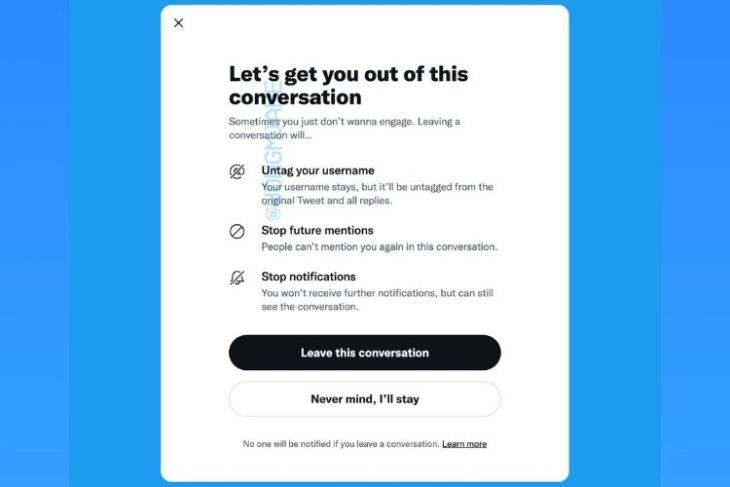 Twitter is testing numerous new features to provide people with more functionality, thus, improving the “tweeting” experience. The latest test on the list is the ability to easily leave a conversation, as discovered by the reputable reverse engineer Jane Manchun Wong. Let’s take a look at the details.

Wong recently came across the new “Leave this conversation” feature that will let you untag yourself from a Twitter thread in which you have been tagged or mentioned. The reverse engineer took to Twitter to share a screenshot, showcasing the new onboarding screen for the feature.

The “Leave this conversation” feature will let you do three things for conversation threads you are tagged in. It untags your username from the original tweet and all the replies, prevents users from mentioning you in the conversation again, and stops all notifications from that Twitter thread. Furthermore, if you leave a conversation, no one in the thread will be notified about the action.

One thing worth noting here is that the new feature is different from the existing “mute this conversation” feature on Twitter, which stops incoming notifications from a conversation thread in which a user has been mentioned or tagged. Wong also explained that the “Leave this conversation” feature removes the hyperlink from the username of a user, making it plain text in the process. This way, if you leave a conversation, no other user will be able to click your username to reach your Twitter handle. That said, you will still be able to view the thread.

As for the availability of the feature, Twitter did not confirm anything about it yet. But, since it has been tested and the company has been introducing a number of new features, we can expect the “Leave this conversation” feature to roll out in the near future. Meanwhile, Twitter recently introduced new ways for users to control how other users engage or interact with their profiles to reduce harassment and abuse on the platform.

Stay tuned for more information and tell us if you think this feature is a welcome addition in the comments below!