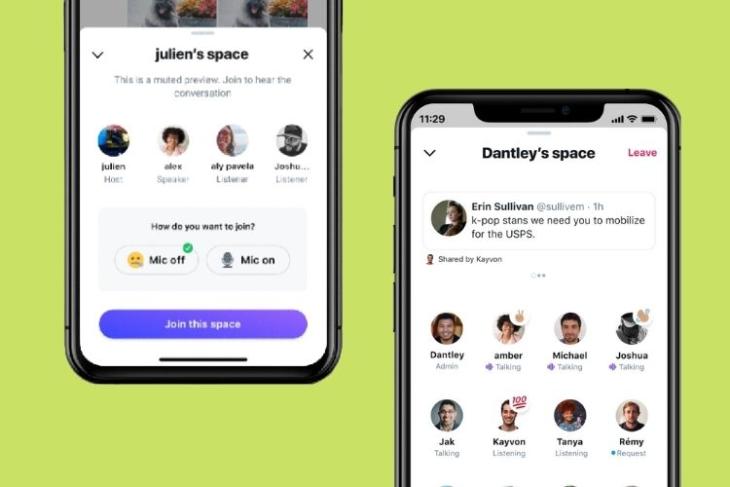 Twitter has now started rolling out its Stories format, Fleets, to users across the globe. It is exactly like Instagram Stories and allows users to share text, images, tweets, and any other thoughts for 24 hours. The fleets then disappear. Alongside Fleets, Twitter has today shown off an upcoming feature, Audio Spaces, rumored to be in the works for quite some time now.

First reported by TechCrunch, the Audio Spaces feature will enable users to gather in an online room to discuss topics live on Twitter. It can be seen as an extension of the audio tweets feature that rolled out earlier this year. While audio tweets let you share opinions and appear in people’s timelines, the Audio Spaces will appear in the ‘Fleets’ carousel at the top.

Twitter is borrowing this idea from Clubhouse, an invite-only audio-based social media platform. The company has not revealed exactly how its Audio Spaces feature works. It is currently unclear how you create an audio space, restrict who can talk, (as shown in the GIF above), or kick users who disrupt the sanctity. It is also amazing to see Twitter offering ways for users to interact and possibly, send in questions or messages even if they can’t talk in a certain Audio Space seminar or AMA.

Now, if you wondering, why is Twitter dabbling with the audio format? We’ve already seen podcasts and short video culture boom and well, the company believes it can do a better job at offering you a safe space to air your views.

“It’s critical that we get safety right – safety and people feeling comfortable in these spaces. We need to get that right in order for people to leverage live audio spaces in the ways we might imagine or in the ways that would be most helpful for them,” said Maya Gold Patterson, Product Designer at Twitter.

The Audio Space feature is not live just yet. Even when it rolls out, it will not become available to everyone. It will be restricted to a “very small group of people — a group of people who are disproportionately impacted by abuse and harm on the platform: women and those from marginalized backgrounds,” adds Patterson.

But yeah, if the tests are a success and Twitter has the necessary feedback/ reporting tools in place, we can expect a wider rollout for the Audio Spaces feature. The social media giant has also revealed that it is testing voice DMs, in line with recent leaks.