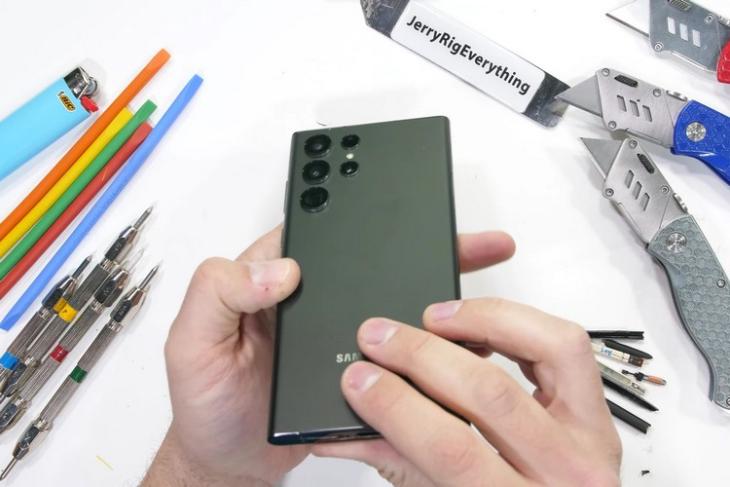 Samsung launched its highest-end Galaxy S22 Ultra with numerous advanced features alongside the standard Galaxy S22 and the S22+ early last month. As a ritual, it had to go through the durability test conducted by Zack Nelson from the popular smartphone durability-focused YouTube channel JerryRigEverything, and to everyone’s glee, it held up pretty well. Let’s check out the details below.

As customers started getting their hands on the resurrector of the now-dead Galaxy Note, Nelson did what he does best and put the Galaxy S22 Ultra through some non-scientific, real-world durability tests. Although many users have been facing a screen flickering issue with the S22 Ultra, the device passed the “JerryRigEverything” durability test with flying colors.

The Galaxy S22 Ultra did not budge or flex an inch in any direction when Nelson applied the force to bend it. This showed that Samsung has lived up to its reputation of manufacturing strong flagship devices that will last longer than many other smartphones in the market, considering it does not become a victim of repeated physical abuse. The Corning Gorilla Glass Victus layer also held up well.

You can check out the entire durability test video of the Galaxy S22 Ultra right below. You can skip to the 7-minute mark in the video to watch the bend test.

Now, while the Galaxy S22 Ultra appears to have “Ultra” strength, you must know that it is better to get a case and a screen protector for a smartphone that costs over a lakh if you did get your hands on one. And if you are planning to buy one, check out how much the Galaxy S22 devices will cost in India right here. Also, don’t forget to let us know how you feel about this test result in the comments below!