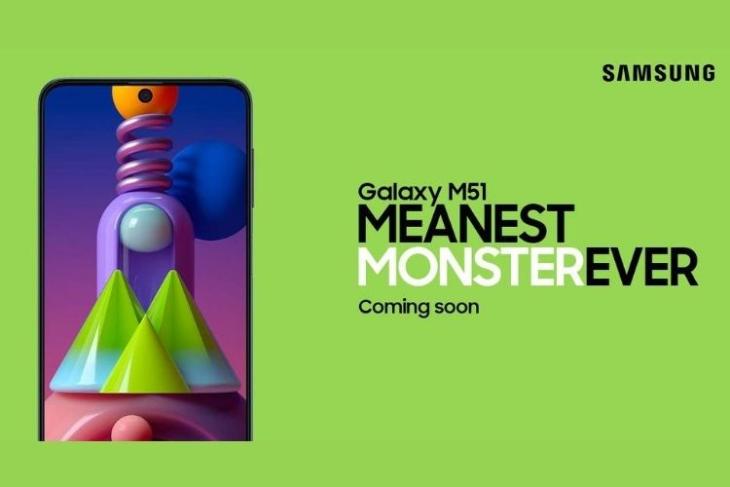 Galaxy M51 has been rumored to be coming for the past few months and well, Amazon India has finally confirmed that its India launch may be round around the corner. The company has set up a dedicated microsite for the Galaxy M51. It not only provides us a first look at the device but also some of its key features.

The Korean giant is teasing the Galaxy M51 launch with the tagline ‘Meanest Monster Ever’ but doesn’t dole out the launch date just yet. You can surely hit ‘Notify Me’ to get updates for the device. The landing page confirms that the device will include a center punch-hole design and it will most likely a Super AMOLED panel.

While Amazon India did not cough up anything else, we delved into the source code and found an image that reveals some of its key specs. Not just that, Galaxy M51 also made an appearance on Google Play Console (via MSP) to confirm the chipset.

As you can see in the images above, Galaxy M51 will arrive with a display with a 2400 x 1080 (Full-HD+) resolution and 420ppi pixel density. It’s expected to be 6.67-inches in size and boast a 60Hz refresh rate, as opposed to 90Hz or 120Hz supported by some of the devices in its price bracket.

Google Play Console listing further confirms that Galaxy M51 will be powered by the Snapdragon 730 chipset – in line with recent leaks. The Amazon screenshot gives us a brief idea of the ‘meanest’ camera specs. The smartphone will include a 64MP quad-camera setup, with a 12MP ultra-wide, a 5MP depth, and a 5MP macro lens rumored to complete the kitty. You will also have a 32MP selfie snapper with 4K recording support on the front.

The highlight of the Galaxy M51 will, however, be its massive battery size. The device will come equipped with a 7,000mAh battery pack as opposed to an already huge 6,000mAh battery found aboard its M-series siblings. It will also support 25W fast-charging via the USB Type-C port at the bottom.

Here's your first look at the official press renders of Samsung Galaxy M51 in Black & White colors!
Without any watermark so guys please credit if you use or share them 🙂#GalaxyM51 pic.twitter.com/OkqLiRyZcw

Some official-looking renders for the Galaxy M51 have already surfaced online and you can find them attached above. They show off a familiar back design, with a rectangular camera setup and a side-mounted fingerprint sensor. There is currently no information on the price and availability but stay tuned for more details.