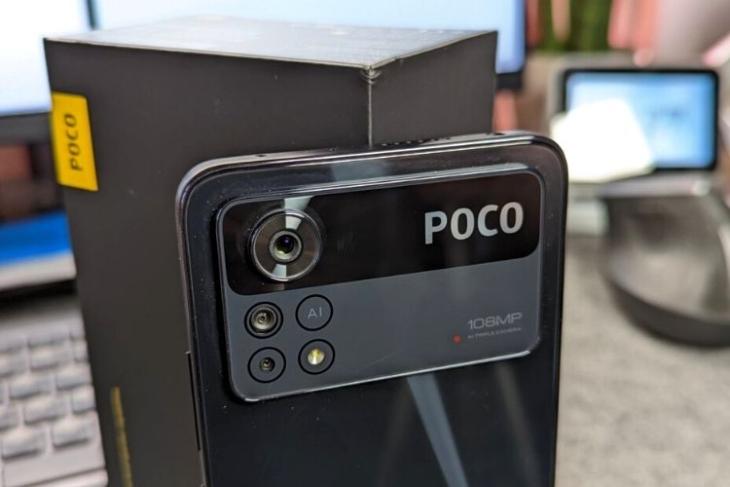 Poco has been rumored to launch the Poco X4 Pro 5G, which could be a possible Redmi Note 11 Pro rebrand, for some time now. Although we don’t have the concrete details, including the phone’s launch date with us, a few hands-on images of the Poco X4 Pro have leaked online. They give us a first look at what the new Poco phone will look like. Plus, there’s some information on the specs sheet front too. Here’s a look at what we know.

As per a first impressions article by SmartDroid, the Poco X4 Pro 5G will come with a new design, as opposed to what its predecessor, the Poco X3 Pro, offered. The images reveal a huge rectangular camera hump, covering the top portion of the phone’s back panel, unlike the X3 Pro’s circular camera module. However, the center-placed punch-hole screen is retained. The device is shown in a Laser Black color but more options might be revealed at the time of launch.

As for the specs, much like the predecessor, the Poco X4 Pro 5G is said to feature a 6.67-inch display with support for a 120Hz refresh rate. However this time, it will be upgraded to an AMOLED panel from an LCD one. It is expected to be powered by a Qualcomm Snapdragon 695 chipset, paired with an Adreno 691 GPU. The phone could come equipped with up to 8GB of RAM and 256GB of storage.

The camera setup is also slated to see some upgrades. The main camera is expected to be rated at 108MP with a Samsung S5KHM2 sensor and support for OIS. Although, previous rumors hinted at a 64MP primary camera. There’s no word on other rear cameras but we can expect an ultra-wide camera and a macro camera to tag along. The front camera configuration remains unknown too.

Additionally, the Poco X4 Pro 5G will get a 5,000mAh battery to get all the work done. It will support 67W fast charging, which is faster than the 33W charging speeds seen on the Poco X3 Pro. Another intriguing part is that it runs MIUI 13 for Poco. However, it is based on Android 11. As for the price, we can expect it to fall between Rs 20,000 and Rs 25,000.

One thing to note is that we are not too sure if this is what it is, considering Poco is yet to give out an official word. Until that happens, take these details with a grain of salt, and we will keep you posted on new details. Also, let us know your thoughts on the design in the comments below!