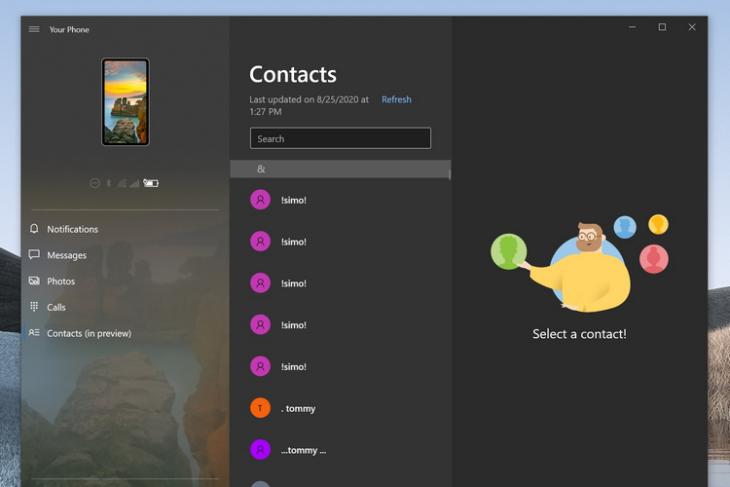 Microsoft’s Your Phone is gaining new features on the Insider channel. As reported by Aggiornamenti Lumia, two upcoming Your Phone features are a dedicated Contacts section and a ‘Sent from phone’ section.

Microsoft has been reportedly working on this Contacts section since February this year. With the Contacts section available for some Insiders, Windows 10 users will be able to browse through the contacts list on their phone from PC. This way, you can easily initiate calls and messages from Your Phone app without having to reach out for your device.

Another feature in the works is the ‘Sent from phone’ section, which is being rolled out to select Insiders. According to the report, the feature will let you share links, images, and notes from your smartphone to your Windows 10 PC.

Once the feature gets a wider rollout, users can simply share images through the Your Phone companion app and access it from their PC. Right now, the feature is not completely functional. As per Aggiornamenti Lumia, Microsoft seems to have just added the section and file sharing is not working at this moment. However, that should get fixed in future updates.

This upcoming Sent from phone section seems promising and may replace services like PushBullet for many users. However, we will have to hold the judgment until the Redmond giant rolls out the functional version. Judging by the company’s commitment to Your Phone app over the past few months, we could expect Microsoft to implement this effectively.