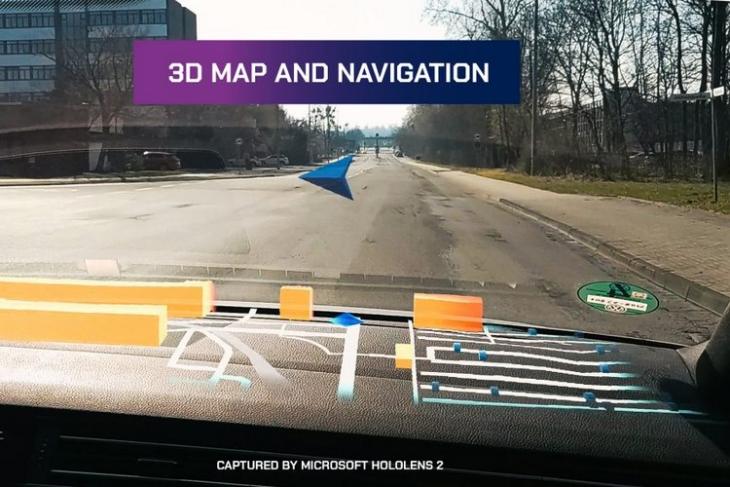 Microsoft has teamed up with Volkswagen to make its mixed reality headset tech work better in moving vehicles such as cars. As part of this effort, the company has unveiled a new “moving platform” mode for its HoloLens 2. This will allow people to get a holographic display of various details while driving. Here’s what this is all about.

HoloLens typically uses visible light cameras and an inertial measurement unit to measure motion. However, the measurements are not reliable in moving environments since it sees a stable environment, similar to what we experience as motion sickness. Considering this limitation, the team developed an algorithm that models the discrepancies between the sensors and allows HoloLens to continue tracking.

After collaborating with Volkswagen, the engineers created a prototype and tested it in real-world scenarios. It proved to be a success and the team then created a bidirectional data connection between the car and the HoloLens to display and control real-time information from the car. One key highlight here is that the team was able to place 3D elements inside and outside the car.

“We connected a positioning system that tracks the location of the vehicle. This way we were able to also place 3D elements such as information on points of interest outside of the car. This opens up completely new possibilities to not only display holograms within the driver’s forward-facing field of view but also wherever the user wearing the glasses is looking,” says Volkswagen’s Michael Wittkämper.

Volkswagen’s Kleen envisions augmented reality making for a seamless connected mobility experience in the future. This involves “people donning smart glasses as they leave home and receiving information through them, from navigational assistance to entertainment, as they travel through their day.“

Microsoft says that the moving platform feature helps remote experts in maritime companies look through the other person’s HoloLens 2 and share their field of view in order to diagnose a problem and provide input. Other than large ships, Microsoft has plans to expand the feature’s support to elevators, trains, cars, and other moving environments. What are your thoughts on this? Let us know in the comments below.