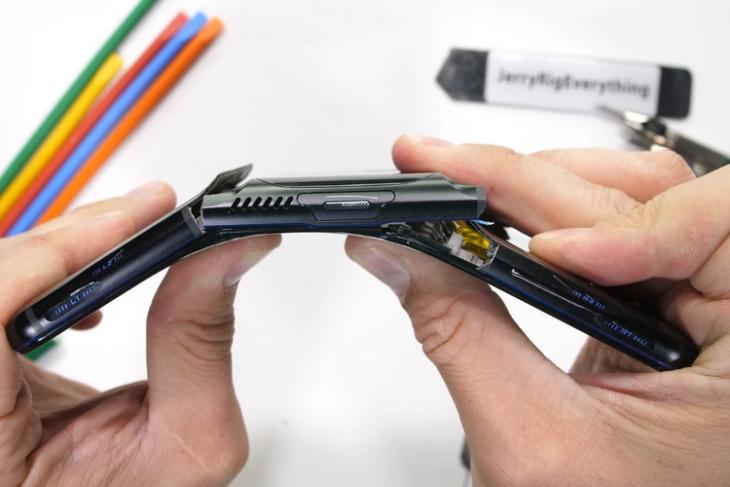 It sure looks like the gaming phones of 2021 are not built to last. Last month, we saw how Asus ROG Phone 5 miserably failed the durability test. This time around, the phone sharing the same fate is Lenovo’s second-gen gaming phone, the Legion Phone Duel 2.

In case you missed it, Lenovo launched the Legion Phone Duel 2 yesterday in Europe and China. The device boasts some impressive specifications, including a twin turbo fan cooling system, a 144Hz display, Snapdragon 888 5G chipset, and up to 18GB of RAM, to name a few. However, when Zack from YouTube channel JerryRigEverything tested the durability of the phone in his usual style, the Legion Phone Duel 2 snapped into three pieces.

“Turns out there is a weaker gaming phone than the ROG Phone 5. The Legion Phone Duel 2, with its two speakers, two fans, and two batteries, is now most definitely in two pieces,” said Zack right after the device pathetically broke down. Spoiler alert: It turns to three pieces later in the video. You can see how the device fails the durability test, without much pressure, around the 8:50 mark in the video.

According to Zack, the Legion Phone Duel 2 failed the durability test due to the positioning of the antenna lines. “If those antenna lines were positioned differently or reinforced internally, this might have gone differently,” he said. However, the front glass remained intact throughout the course of the video.

Lenovo ships a thin clear plastic case with the Legion Phone Duel 2. However, after watching this video, it is evident that you should invest in a good hard case if you are planning to purchase the device for some serious mobile gaming sessions.