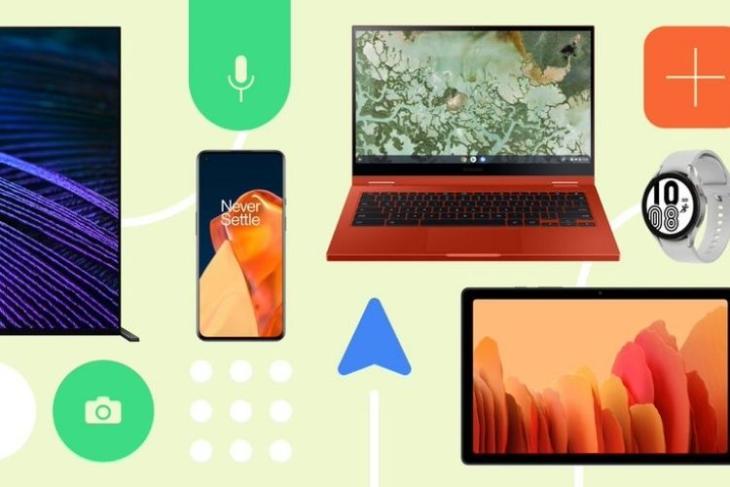 While Google decided to not show up for CES 2022, it still decided to unveil a number of features for its devices. Unlike other companies who are unveiling a plethora of hardware, Google focused on how it can make the connectivity part of Android-based devices work better. Here’s what all it announced.

Google Wants to Make Connectivity Easier Than Ever

Firstly, Google will make setting up a new device a lot easier. The Fast Pair functionality is now reaching Android TVs and smart home devices, making it simpler for people to pair and set up new devices with their smartphones. This functionality is already available for Bluetooth-enabled audio products, wearables, and even cars.

The feature will also allow users to connect their headphones with a Chromebook with a single click. Later this year, users will be able to quickly set up their new Chromebooks via their Android phones and get access to important details like the Google login credentials and Wi-Fi passwords in a jiffy.

Google will also introduce the ability for users to connect their headphones with Google TV or Android-based TVs in the coming months. This feature is applicable for Matter-based smart devices that will use Fast Pair to connect to the network, Google Home, and other accompanying apps.

Another interesting feature, which will be introduced in the coming months, will allow the users to unlock their Chromebooks and Android phones with a Wear0S smartwatch, much like how Apple allows. Compatible Samsung and Pixel phones will act as digital car keys for BMW vehicles soon and starting later this year, people with an Ultra-Wideband tech-enabled phone won’t even require to take out the phone to unlock a compatible car. Remotely sharing car keys with friends will also become easier.

Another addition will be the ability to juggle audio between devices. This means that if users are watching a video on a Chromebook and get a call, the connected headphones will automatically switch to the phone to take the call. Once done, it will move back to the laptop to continue watching the paused movie. Supported headphones will soon get spatial audio in the next few months for a 360-degree audio experience.

The ability to share content with others via Chromecast is also reaching more brands such as Bose smart speakers and soundbars in the next few months. More features to Phone Hub on Chromebooks will also be added, which will allow users to access chat apps on their Chromebooks without the need for downloading them. Plus, a Camera Roll feature will be added to the Phone Hub.

Additionally, more voice-based commands will reach more cars starting with Volvo in the coming months, and users will be able to easily pair their phones and Bluetooth devices, sync their messages, and more with Windows PCs. It will start with Acer, HP, and Intel later this year.