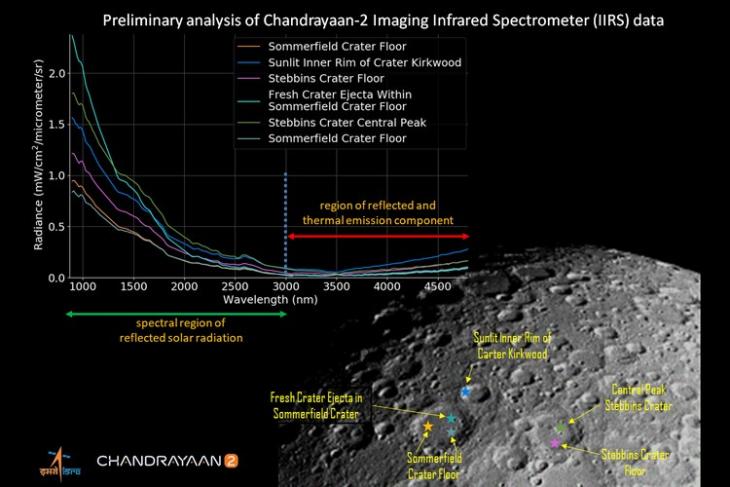 The Indian Space Research Organization (ISRO) has released the first image of the surface of the moon captured by the Imaging Infrared Spectrometer (IIRS) on the Chandrayaan 2. In an official blog post on Thursday, the organization said the image covers part of the lunar farside in the northern hemisphere, with the Sommerfield, Stebbins and Kirkwood craters prominently visible.

According to ISRO, the IIRS is “designed to measure the reflected sunlight and emitted part of Moon light from the lunar surface in narrow and contiguous spectral channels (bands) ranging from ~800 – 5000 nanometer”. Its prominent objective is to “understand the origin and evolution of the Moon in a geologic context by mapping the lunar surface mineral and volatile composition using signatures in the reflected solar spectrum”, said the organization.

#ISRO
See the first illuminated image of the lunar surface acquired by #Chandrayaan2’s IIRS payload. IIRS is designed to measure reflected sunlight from the lunar surface in narrow and contiguous spectral channels.

According to the post, the IIRS payload could possibly also measure the variations in the reflected solar radiation that bounces off the lunar surface from different kinds of topography, including, crater central peaks (example Stebbins), crater floors (example Stebbins and Sommerfield), very fresh reworked ejecta associated with small craterlets within the crater floor of a large crater (example Sommerfield) and also the sun-illuminated inner rims of craters (example Kirkwood).

It’s worth noting that the Chandrayyan-2 mission received a massive setback last month when its moon lander, Vikram, lost touch with mission control before touchdown. Named after the father of India’s space program, Vikram Sarabhai, the vehicle was expected to land on the so-called ‘dark side of the moon’ as part of a mission to gather more information about the lunar South Pole that has remained largely unexplored over the years.