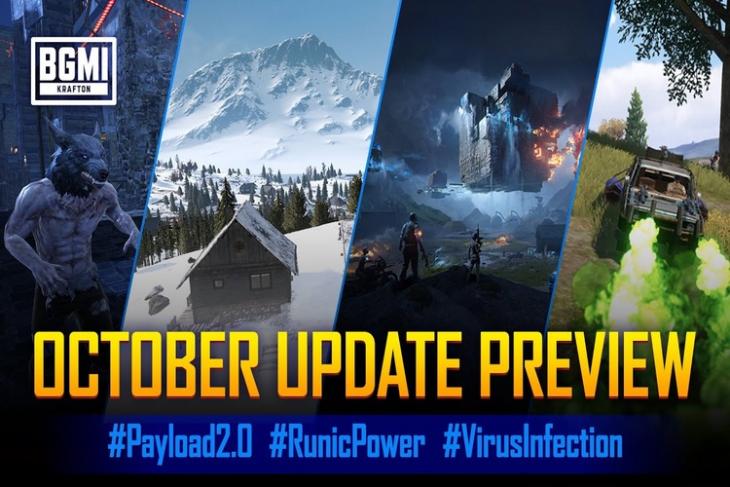 After releasing v1.6 update in September, Battlegrounds Mobile India is preparing to roll out the v1.6.5 update in the country. The update is coming this month and the company has shared a preview of the BGMI October update patch notes on its official YouTube channel.

While BGMI highlights the presence of older modes and maps like Metro Royale, Survive Till Dawn, and Vikendi, the new game modes coming to BGMI in the new October update include Runic Power, Virus Infection – Halloween, and Payload 2.0.

Available from October 15, Runic Power mode lets you choose one of the runes — Wind, Flame, or Ice at the Spawn Island and use its powers during the game. Each rune has two different skills for offense and defense. You will need rune crystals to activate these rune skills.

Wind Rune lets you create wind shelter shield to reduce damage and wind boost to increase movement and reload speeds. Flame Rune creates a magma wheel that rolls forward and adds a burning effect on bullets to increase damage. Lastly, the Arctic Rune creates a wall of ice and lets you shoot bullets that reduce the healing effects of enemies.

Payload 2.0 mode is coming to BGMI on October 31. In Payload 2.0, helicopters and armed cars equip upgraded weapons. New BGMI weapons added in Payload 2.0 include AT4-A Laser Missile and M202 Quadruple RPG. Moreover, man-portable radar, bomb suit, and UAV control terminal are coming soon. You can collect these weapons in Super Weapon Crates whose positions will be marked on the minimap.

Also arriving on October 31 is the Virus Infection mode. Virus Infection mode will feature three rounds. Humans and zombies are divided randomly in each round. As you would expect, the zombies attack humans to infect them and humans need to survive from these undying zombies. Zombies can acquire boosters or infect humans to reach Level 3 and become Zombie King.

Meanwhile, humans turn into heroes when there are just three humans alive in the game. Once heroes appear, zombies and humans can eliminate each other. Zombies will win if all humans are infected and humans win if any human/ hero survives.

You can watch the patch notes preview video of BGMI October update below: