Linux stopped being an OS reserved for “geeks” a long time ago. While the command-line is still indispensable, all popular Linux distributions offer a full-fledged graphical interface, called desktop environment (DE) in which you can work like in any other OS.

If you’ve decided to switch to Linux in 2015, or you just want to give it a spin, here are 15 best Linux distros to choose from. 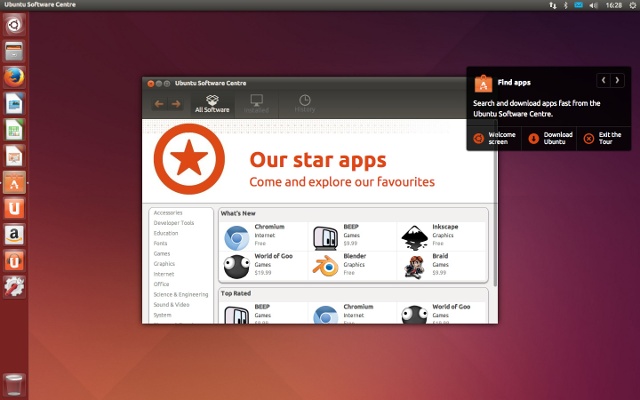 Ubuntu is a Debian-based distribution that redefined the meaning of “user-friendly” on Linux, and its immense popularity contributed to the widespread acceptance of Linux over the past few years. Ubuntu comes in many flavors – you can install any DE you want, but it also has its own desktop shell called Unity. Two new Ubuntu releases are expected in 2015, and one of them might bring the (controversial) new display server called Mir that’s supposed to replace the now outdated X Window System. February 2015 saw the announcement of the first smartphone powered by Ubuntu’s mobile version Ubuntu Touch, so there’s a lot to look forward to from Ubuntu.

Best for: beginners and users switching from OS X and Windows

Linux Mint has been steadily rising in popularity ever since it came out as a Ubuntu spin-off with multimedia codecs offered out-of-the-box. Today it has its own desktop environment – Cinnamon, handy system utilities (Update Manager, Mint Menu, Software Manager…), and comes in several flavors (KDE, XFCE, Mate). Current stable version is 17.1 (Rebecca) which is a LTS release that will be supported until 2019. There’s also a semi-rolling release based on Debian, which comes in Cinnamon and Mate versions. Linux Mint offers many applications by default (LibreOffice, Firefox, Pidgin, GIMP…), it’s highly customizable and fully compatible with Ubuntu’s repositories, and works well even on older computers. 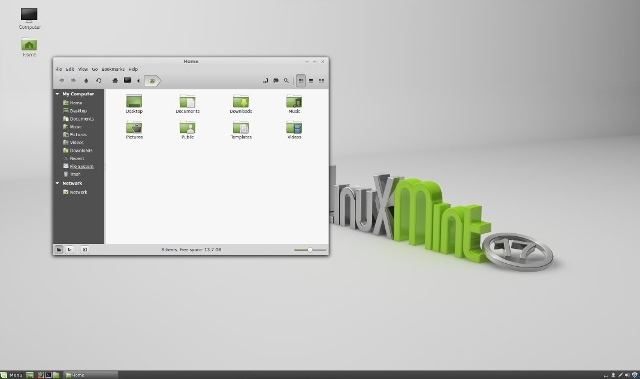 Best for: first-time Linux users and everyone who wants a system that works out-of-the-box 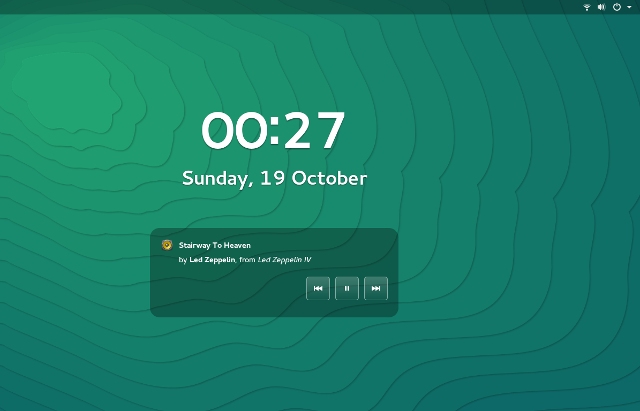 openSUSE is popular Linux distribution renowned among commercial and private users alike. It’s based on RPM package management system and has KDE as the main desktop environment, but offers GNOME, XFCE, LXDE, Mate and others for installation. Apart from the stable release, openSUSE also has a rolling release (Tumbleweed) for those who want the latest software. It offers a complete system management solution called YaST and comes with enough pre-installed applications to get you started.

Best for: users who want a stable and reliable system with great support 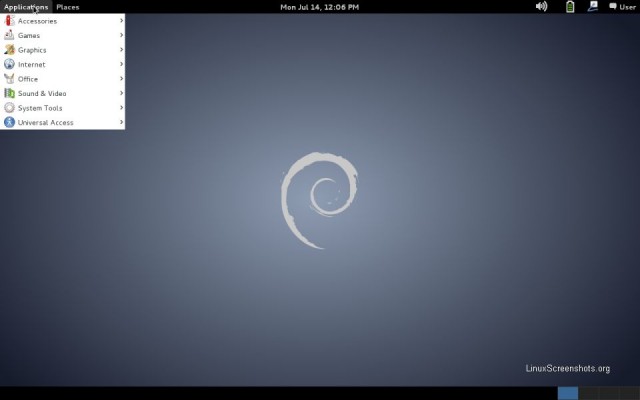 Debian is one of the oldest and best supported Linux distributions out there. Technically, it’s the (grand)father of several other distros on this list. It’s focused on stability, so new versions don’t come out often, but when they do, they’re thoroughly tested (and named after Toy Story characters!). Debian offers an incredible amount of packages – more than 37 000 – basically, almost any software that exists for Linux has a Debian package. You can try Debian in Live mode before installing it, and choose between a minimal or full installation. There’s a graphical installer to guide you through the process, and you can install any DE you wish, as they are all supported.

Best for: servers, users who want a stable and secure system, and those who don’t want to update their apps often 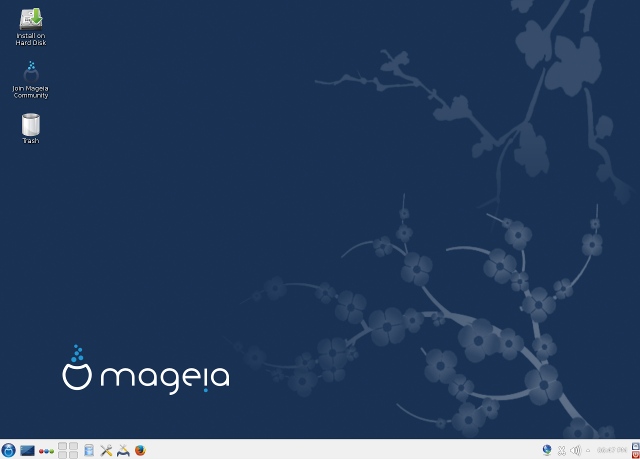 Mageia is a distribution created from Mandriva Linux by its former employees in 2010. It uses the RPM package management system and offers many desktop environments: KDE, GNOME, LXDE, XFCE, Mate, Cinnamon and RazorQt can all be installed either from the Mageia DVD or from the repositories. Current stable version is Mageia 4, released last year, and a new release is planned for this year, which will bring many improvements and come with Btfrs file system as default. Mageia provides helpful tools for system setup and customization, and it’s a great choice if you want to step away from Ubuntu-based distributions and try something different.

Best for: users who want to try a new Linux distro that’s user-friendly and supports many DEs 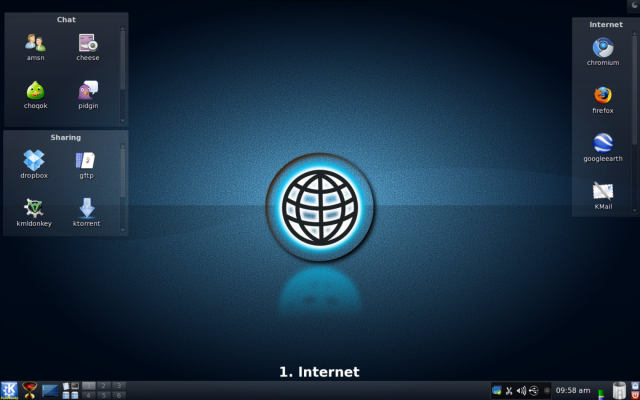 PC Linux OS, or PCLOS for short, has a reputation of a simple distribution that supports a lot of hardware out-of-the-box, including some old devices. It comes in two lightweight flavors – LXDE and Mate, the standard KDE desktop, and a special, really cool edition called FullMonty, which is a customized KDE edition with many pre-installed applications and separate desktops for different activities (Writing, Music, Internet…). PCLOS uses the RPM packaging system and has its own repository with enough applications to keep you happy. It’s a rolling release distribution, so you can expect regular updates and new versions of software.

Best for: beginners who want the newest software, users who don’t want to spend too much time setting up their system 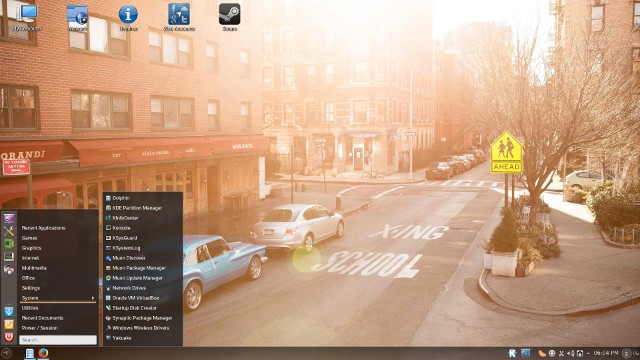 Best for: users who want a simple and beautiful KDE-only distribution 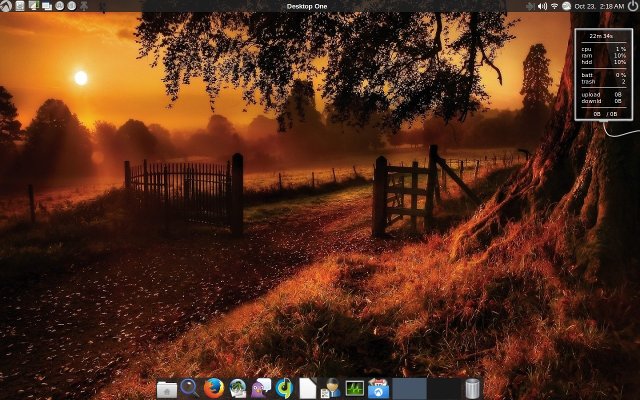 LXLE is a new player on the Linux distro scene, but it’s already collecting praise and satisfied users. It’s a lightweight Ubuntu-based distribution with LXDE as its main (and only) desktop environment. The goal of LXLE is to ensure a seamless transition to users who are switching from OS X or Windows by providing different desktop layouts that “mimic” the appearance of other operating systems. This makes it easier for users to adapt to the new OS. LXLE comes bundled with all the applications you need: from text editors, email and IM clients to multimedia tools, file viewers and system utilities. Still, none of this makes LXLE slow – it’s optimized for old computers and comes in both 32- and 64-bit versions.

Best for: users switching from OS X and Windows, and those who want to revive their old PCs 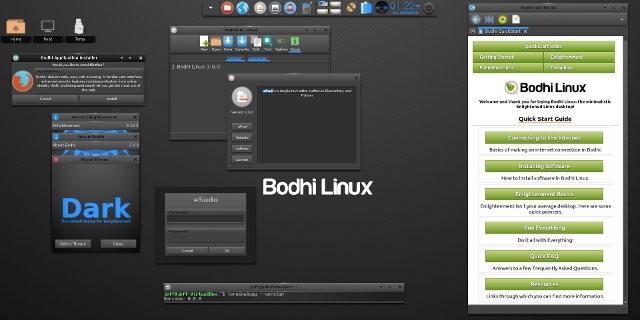 Bodhi Linux is all about minimalism and anti-bloat – it offers only a few basic applications by default, and lets the users choose what they want to install through the AppCenter. Bodhi uses a lightweight desktop environment not seen in many other distributions. It’s called Enlightenment, and it’s very fast and customizable. The latest stable Bodhi version (3.0) was released on February 17, and since every stable Bodhi is based on Ubuntu LTS, it will be supported until 2019.

Best for: old computers, users who just want a basic set of apps 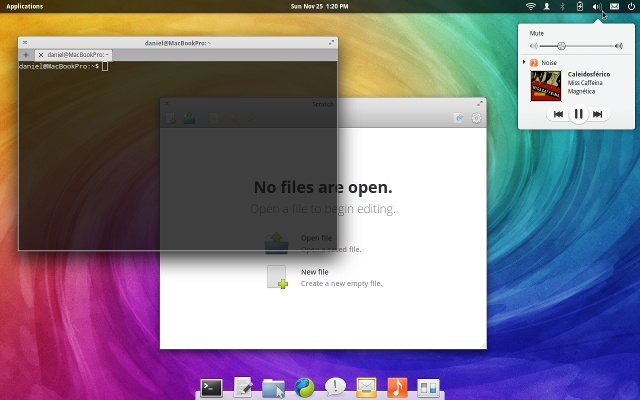 ElementaryOS is another Ubuntu-based distribution, and it puts simplicity, beauty and harmonious design above everything else. You get a set of basic applications that cover the most important actions (music, email, text editing…) and the rest can be installed from their app store. ElementaryOS has its own file manager and its own desktop environment called Pantheon with core components such as dock (Plank), application launcher (Slingshot) and panel (Wingpanel). It’s a distribution that “just works” once everything is set up, and it’s very light on the system resources. Expect a new release (codenamed Freya) in 2015.

Best for: old computers, users who want a Linux distribution that looks like OS X 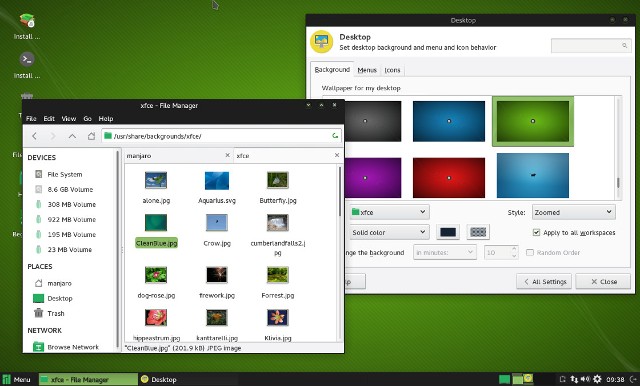 Manjaro Linux takes the incredible power of Arch Linux and makes it easier to wield thanks to a user-friendly approach, especially in regards to installing the distribution and maintaining your system. The default DE is the lightweight, reliable XFCE, but KDE, GNOME and Cinnamon versions are also available. Manjaro offers automatic hardware detection and driver support, use of multiple kernels, and its own repositories with tested software. However, users can also access Arch Linux repositories and get software from there. Since it’s a rolling release distribution, your system is always up-to-date. Manjaro is a great choice if you want the latest software, but don’t want to jump through too many hoops to get it. 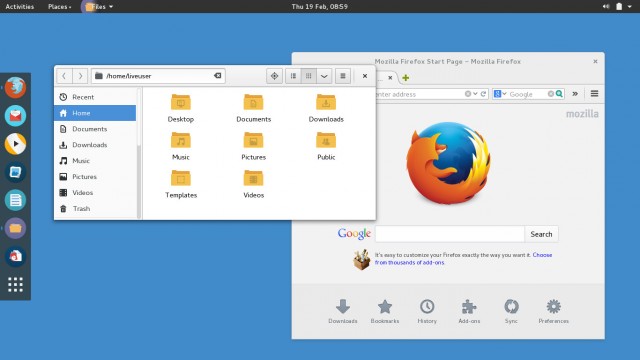 Korora is based on Fedora, but provides multimedia codecs and third-party repositories to make the setup process easier for new users. It comes in GNOME, KDE, Cinnamon, Mate, and XFCE editions with beautiful icons and a simple desktop layout. The purpose of Korora is to make Fedora more appealing to a wider audience by including popular applications like Firefox, VLC, Google Chrome and Dropbox by default. Releases follow Fedora’s schedule, so you can expect a new stable Korora in 2015. Fun fact: the name “Korora” means “little penguin” in Maori language. 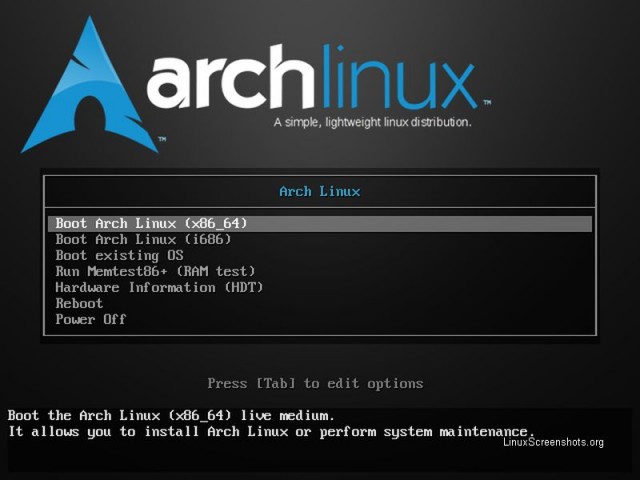 Arch Linux is a powerful Linux distribution, but with great power comes great responsibility, and in this case it means responsibility for your own system. Installation and setup of Arch Linux requires relatively advanced knowledge, but it can be managed with the help of detailed tutorials and official guides. You can install anything on Arch Linux – KDE, Cinnamon, GNOME…, and there are hundreds of applications available in the Arch User Repository (AUR). It’s a rolling release distro with new snapshots released quite often, but the updates can sometimes break your system. Arch Linux puts you in complete control because you get to choose and tweak every little detail. Among the best things about this distribution are the official forums and wiki where you can get help for any kind of problem you encounter.

Best for: advanced users, average users who want to learn more about Linux, users who prefer a minimalist setup 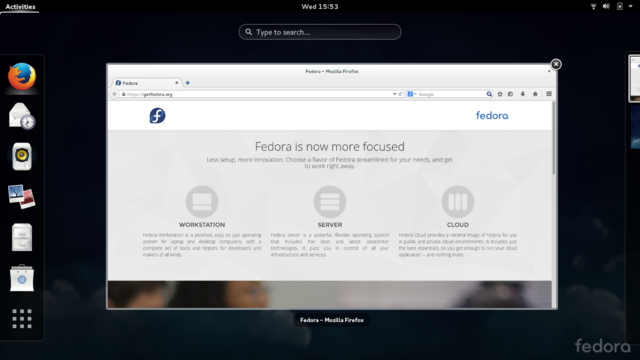 Fedora is often referred to as a “bleeding-edge” distribution, meaning that it’s focused on innovation and latest technologies, sometimes at the cost of stability. It comes in three main editions: Workstation, Server and Cloud, and there are numerous Spins or versions of Fedora which provide different desktop environments and software collections. The default DE, however, is GNOME. Fedora is a RPM distribution with its own repositories. A particularly important feature is Security-Enhanced (SE) Linux which is implemented in the kernel and serves to make Fedora a safer distribution, but also lets the user control different security policies.

Best for: advanced users who want to test the latest software, users who value system security 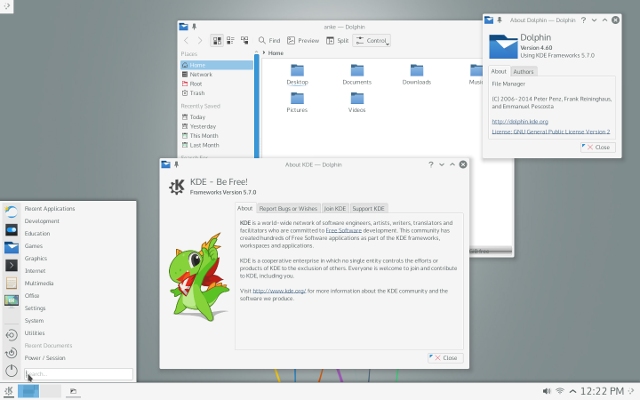 KaOS is a young Linux distribution that’s all about fresh software and technologies. The latest stable version from February 2015 brings the newest from KDE – namely, a complete switch to Plasma 5. Apart from KDE applications, KaOS offers its own software manager called Octopi and the lightweight QupZilla as the default web browser. KaOS is a rolling release distribution and it only works on 64-bit systems. As such, it’s obviously not the best choice for everyone, but it’s great if you want to play with new KDE applications.

Best for: average and advanced users who want to test Plasma 5

10 Linux Distros You Should Know About

What’s the Difference Between Ubuntu and Fedora?