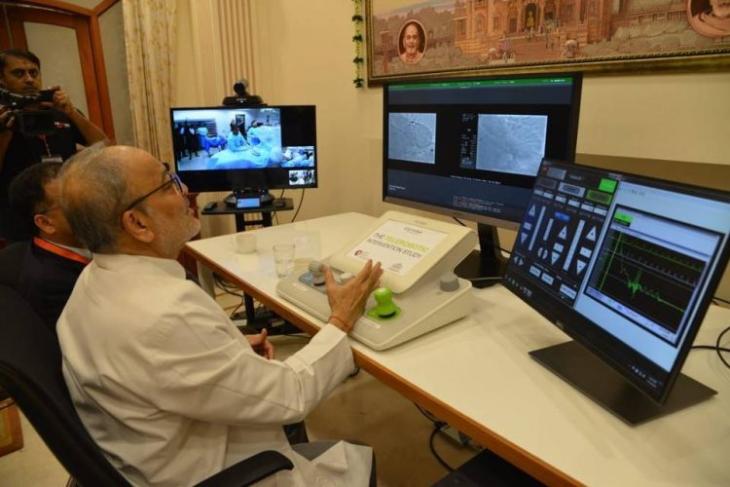 Gujarat Chief Minister Vijay Rupani, present at the Akshardham temple to watch the surgery take place, said: “Gujarat government will be thinking on how to utilize this technology to save precious lives. With experts like Tejas Patel, we will move ahead.”

Known as in-human telerobotic coronary intervention in the medical terminology, the operation was the one which is popularly known as stent placing in the arteries. 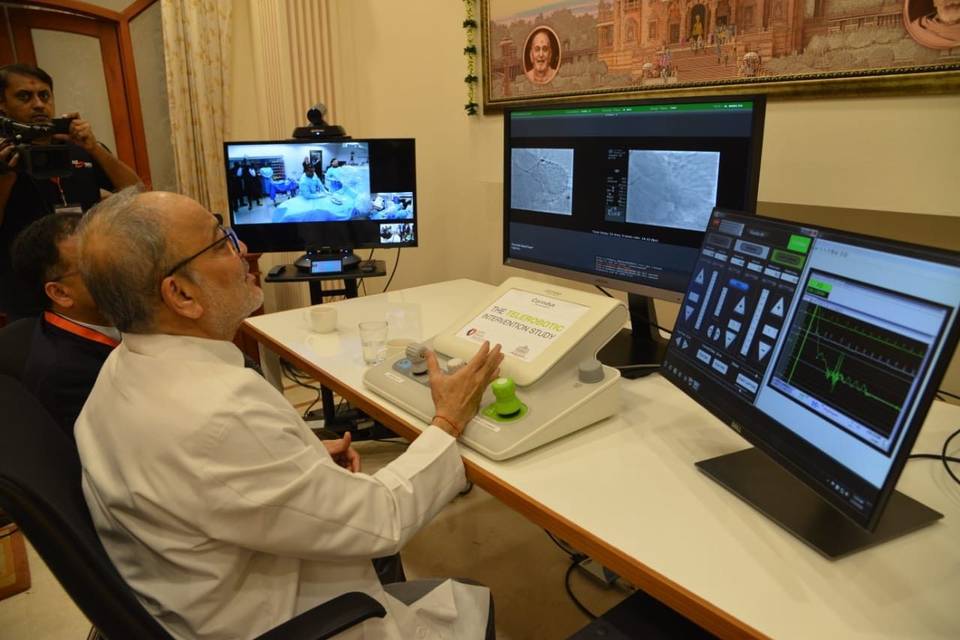 The difference between conventional stent placing and the latest method was that the cardiologist performed the surgery while sitting in the auspicious place of Akshardham temple in Gandhinagar, while the female patient being operated upon was lying admitted in a hospital in Ahmedabad, 32km from the surgeon.

World’s first such surgery was operated upon through a revolutionary and patented technology, Corpath, developed by an American corporate, Corindus Vascular Robotics, Inc. Using a hundred Megabytes per second (100 Mbps) internet network, this landmark achievement was fulfilled.

The first-of-its-kind surgery happened 32 years after the world’s first stent surgery was carried out in 1986.

A female patient volunteering for such operation is a woman from Kalol. “The woman had a heart attack recently and one artery was already operated upon. Today we placed a stent in the second artery that was clogged. This history making feat is my small tribute to the Pramukh Swami Maharaj,” said Dr Patel after the operation.

This significant breakthrough paves the way for extremely critical cardiovascular surgery getting accessible to the remotest corner anywhere. The patient need not be near the expert.

“Right now, as the technology is in a nascent stage, it is somewhat costlier by around Rs 45-50 thousand than conventional surgery, but with increase in its usage, it will come down. This is first of the coming transformations of utilizing mobile technology in modern surgery,” added Patel.

“Our patented technology can even be adopted in the existing conventional operation theaters, with some modifications. Due to limited access to specialized and timely medical care, only a few patients worldwide receive life-saving treatment. We hope that our technology will revolutionize cardiovascular disease treatment by providing such treatment to anyone, anywhere,” said Mark Toland, the president and Chief Executive Officer, Corindus.

The experts said that even though the network connectivity of 100 Mbps was used to carry out this surgery, the required bandwidth is only 20 Mbps.

For such high-end surgery to be made accessible to the remotest corner of the country, special training is needed to be imparted to the local surgeons. “I look forward to getting this technology available to the common man in the remotest area,” said Patel.