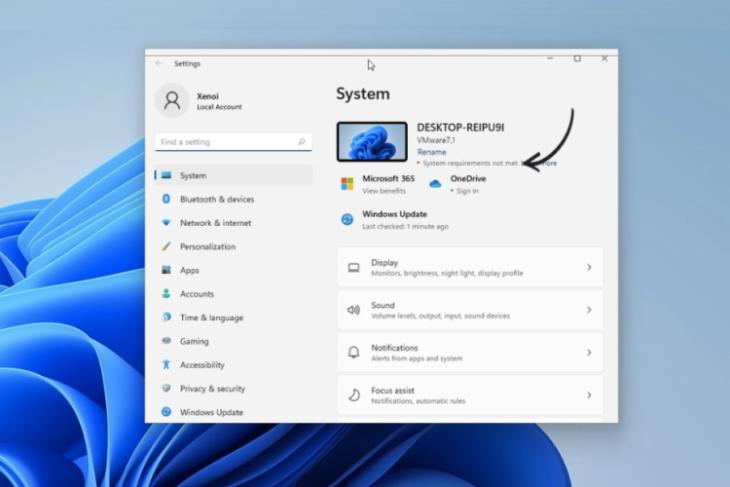 Earlier last week, Microsoft released Windows 11 build 22000.588 to beta testers with a new notification-delivery system and other minor improvements. However, what the Redmond giant did not mention in its official patch notes is the fact that the update also adds a warning watermark on devices running Windows 11 with unsupported hardware. Let’s take a look at the details below.

Windows 11 on Unsupported Devices Now Has a Watermark

According to reports, Microsoft was found to be testing a new “system requirement not met” watermark for Windows 11 running on unsupported hardware last month. Now, the company has started rolling it out to beta testers before releasing it to the stable channel.

Following the rollout of the latest Windows 11 update last week, Insiders have confirmed that Windows 11 running on unsupported hardware now shows a new watermark at the bottom-right corner of their screen. There’s also a similar warning on the system page of the Settings app. The new watermark reads: “System requirements not met. Go to settings to learn more” on the desktop. However, the company did not mention the addition of a new watermark in the official patch notes.

Now, for those wondering, Microsoft limited Windows 11 to recent PCs and laptops with high system requirements to run the OS. However, many have used workarounds to get Windows 11 up and running on unsupported hardware, though some apps and tools did not work for these devices.

Microsoft used warning watermarks like the recent one for unactivated Windows versions in the past. The company restricted many Windows features such as dark mode, personalization settings, and themes for these devices. However, the company is not doing the same for Windows 11 running on unsupported devices other than showing the watermark, which could also be removed with some registry changes, presumably. We are currently looking into ways to remove the watermark and will share a step-by-step guide with you soon. Stay tuned for more updates.