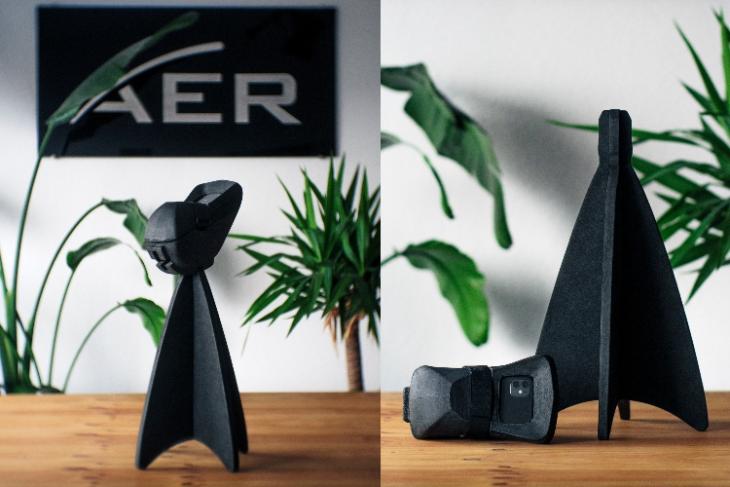 Have you ever wanted to take an aerial shot of a place and only had your phone in your pocket? One way of capturing such a shot with your phone is to throw your device in the air. However, are you willing to throw your expensive smartphone in the air with the hope of catching it safely just for a haphazard aerial shot? Well, I am sure you would be if you had the AER TYP foam protector with you in your backpack!

Short for Throw Your Phone (TYP), the AER TYP is a modified, super-protective phone case that lets you capture amazing aerial shots by throwing your smartphone in the air. It has a rocket-style design along with a compact compartment to hold the smartphone. The compartment has a transparent rectangular cutout that allows the rear cameras of a device to capture breathtaking aerial shots when thrown in the air.

The company dubbed AER usually makes protective contraptions for GoPro cameras to let users get some unique shots with their GoPro devices. However, with the AER TYP, the Germany-based company aims to cater to the smartphone segment as smartphone cameras are becoming more advanced than ever.

So, if you get an AER TYP accessory, you can mount your smartphone inside the dedicated compartment with the rear camera facing the front. Following this, you can throw the accessory in the air towards a friend or even a wall to capture unique aerial footage. You can check out the promo video below to get a better idea of how to use the AER TYP to get some astonishing aerial shots.

As you can see, the AER TYP is a foam-based protective casing for smartphones that is designed to handle heavy physical impacts without damaging your smartphone. However, you would have to make sure that your device is securely strapped inside the compartment and is recording the whole time.

Now, coming to availability, the company is currently running a campaign for the AER TYP on Kickstarter. It has already raised more than $18,000 (~Rs 13,52,000) from over 350 backers as of writing this article.

So, if you want this nifty accessory to capture unique aerial shots, you can go to the official Kickstarter page and pledge €39 (~Rs 3,972) to pre-order the AER TYP at an early bird price. The company will start shipping the orders from April 2022.

This Super-Useful USB Hub for MacBook Pro is Almost “Invisible”