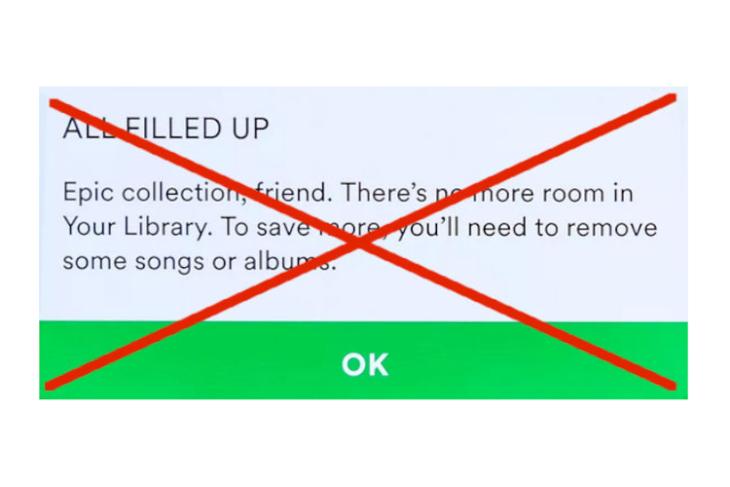 Spotify has had a 10,000 song limit in the library for quite a while now. The company is now making changes to let users add as many songs they would like to the music library.

Up until now, the Swedish music streaming giant used to show an error that reads “Epic collection, friend. There’s no more room in Your Library. To save more, you’ll need to remove some songs or albums.”, once the user hits the aforesaid limit.

With that said, it is worth noting that this change does not impact the offline listening experience. Spotify users will still be limited to 10,000 song downloads on five different devices.  Also, the changes are not applicable to playlists as well. The maximum limit for playlists remains to be 10,000 tracks.

To know how we got here, we will have to take a look at a bit of history involving the feature’s evolution. Back in 2014, the feature request to increase the song limit started to gain traction and amassed over 12,500 votes.

The company responded with a statement as follows: “We’ve recently reviewed this internally and at the moment we don’t have plans to extend the Your Music limit. The reason is because less than 1% of users reach it. The current limit ensures a great experience for 99% of users instead of an “OK” experience for 100%.”

This sounds reasonable considering the fact that the ability to have 10,000 songs in the library is a decent limit. To put that in perspective, consider a song’s average length to be 4 minutes and multiply it with the limit. We get 40,000 minutes, which translates to almost a month. In other words, it would take almost a month to actually “listen” to an entire library consisting of 10,000 songs once.

However, some Spotify users apparently wanted the option to pile up songs to their library, which in turn made Spotify remove the limit now. In case you’re still seeing the error, Spotify promises that all users will get the new experience soon, which should hopefully happen in the coming weeks.