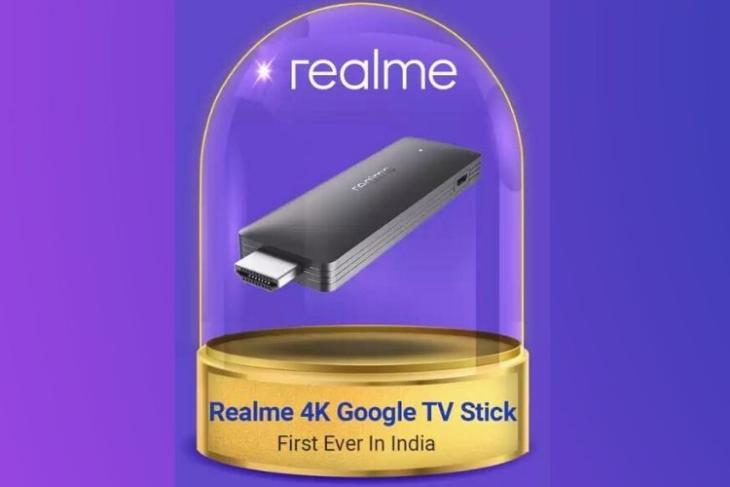 Realme has been expanding its products portfolio by stepping foot into various new categories. After entering the smart TV category last year, Realme is now looking to introduce its first-ever streaming device in India soon. After confirmation from the CEO of Realme India, Madhav Seth, the company has now teased its upcoming Realme 4K Google TV Stick on Flipkart.

In a recent interview, the CEO of Realme India Madhav Seth confirmed to launch a TV streaming dongle under the Realme brand in India soon. Now just hours after the confirmation, a promotional page for Flipkart’s upcoming Big Billion Days sale has revealed the Realme 4K Google TV Stick.

At first glance, the TV stick looks pretty bulky with sharp corners and a boxy design. Nonetheless, as the name tells, the Realme 4K Google TV Stick will enable you to stream 4K content on compatible TVs. Plus, it might also be able to stream HDR content. Moreover, it would come with an HDMI connector and a USB-A port onboard. The TV stick will presumably run the Google TV launcher based on the Android TV 10 OS. With this, Realme will enter the new market segment to compete with the likes of Amazon and Xiaomi.

Other than these, there is not much information about the TV stick available as of now. In fact, Realme has not even officially mentioned anything about the 4K TV Stick yet.

However, as the product banner has gone live on Flipkart as part of the Big Billion Days sale event, we safely assume that the launch of the Realme 4K Google TV Stick is imminent in India. Flipkart has not yet announced the dates of its sale event either. So, the device might go on sale during one of the biggest sale events in India.

Stay tuned for more developments in this story. We will keep you in the loop once Flipkart announces the dates or we get new information about Realme’s first-ever Android TV stick in India.